The Commercial Court has backed An Bord Pleanála's decision to grant permission to Apple to build an €850m data centre near Athenry, Co Galway.

Mr Justice Paul McDermott said he was refusing both applications from the objectors and that his reasons are set out in written judgments.

Apple first announced plans to construct the data centre on a greenfield site at Derrydonnell Woods near the Co Galway town in February 2015.

Construction of the first phase promised to generate 300 temporary jobs, with 100 permanent staff required to run it.

The following September, Galway County Council gave permission for it to proceed subject to conditions, but that decision was subsequently appealed to An Bord Pleanála.

However, three objectors subsequently asked the fast track Commercial Court division of the High Court to review the decision.

Among their arguments was that the planning permission was invalid because the board failed to carry out a proper environmental impact assessment of the proposed development.

Paul Keane, of the Athenry for Apple group, said he is cautiously optimistic that today's High Court decision will not be appealed.

Speaking on RTÉ’s News At One, he said the Athenry for Apple group is delighted with today's outcome.

Mr Keane added that he is hopeful the judgement given by Mr Justice McDermott "explained that there wasn't really any case for objection".

"I'm cautiously optimistic that the judgement given today was very firm and it explained that there wasn't any case for objection on this so hopefully the next stage in this process is that Apple goes into the forest that I live beside and starts building the data centre and we will very much welcome the new neighbour to the neighbourhood."

Mr Keane said that there will be a "severe knock-on effect" if the data centre does not go ahead.

He added Ireland's reputation as a place to business has been "battered by this process."

A spokesperson for Apple said that the company is not commenting on the judgment at this time.

Speaking following delivery of the judgment, objector Allan Daly said he wished to take some time to consider the decision of the court.

The other two applicants, Sinead FitzPatrick and Brian McDonagh, could not be reached for comment.

Members of the Athenry for Apple support group who were in court for the judgment expressed their delight afterwards.

He said it was an incredibly important decision but more important now was the changes that need to be made to the planning process and the courts system to repair the damage that has already been done to Ireland's reputation as a place to do business for foreign direct investment.

He said he was concerned there could be an appeal but called for common sense to prevail to let the project go ahead.

The decision can be appealed to the Court of Appeal if sufficient legal grounds for such a case can be identified and permission granted.

Local TDs also welcomed the decision and have been critical of the planning delays.

Independent TD Michael Fitzmaurice said: "Hopefully now the company will continue with its plans for the development as there will be significant employment provided during construction and over 100 permanent jobs on completion.

"In light of the time that it took to arrive at this decision we will have to take a critical look at this whole process because the way it stands it is far too slow and is a threat to employment and the economy in general."

Independent TD Noel Grealish said he was "delighted the go-ahead has finally been given" but he was concerned that it had taken so long to get to the project to this stage.

"I am concerned that other major international companies may also have their future plans influenced by Apple's experience," said Mr Grealish.

"It all points to a need to reform our planning laws so that important infrastructural development such as this do not get caught up in years of objections and appeal after appeal."

Ibec, the group that represents Irish business, said the ruling "upholds that the correct decision was made by Galway County Council over two years ago and also by An Bord Pleanála.

Ibec Executive Órla Casey said: "The Apple Athenry case is a very good example of a planning system that in its current form is dysfunctional and can too easily be exploited.  This had been a long-drawn out process, yet the local community and Apple have continuously demonstrated their commitment to the project and to investing in Ireland."

In his judgment on the application made by Ms FitzPatrick and Mr Daly, Mr Justice McDermott said he was satisfied that An Bord Pleanála's decision when read together with its inspector's report constituted an adequate record of the Environmental Impact Assessment carried out by the board and is in compliance with the statutory obligations.

The judge said he was also not satisfied with the claim by the applicants that the Board did not give any consideration to the issues around location.

He also said he was satisfied that an appropriate EIA was carried out in respect of the project and that the applicants and others had ample opportunity to consider and make representations upon the extensive documentation and materials furnished to the Board and to the Inspector during the course of the oral hearings.

"The documentation clearly establishes that the Inspector and the Board assessed the cumulative impacts which were likely to arise from the completion of the two projects under consideration in combination and this included an assessment insofar as it was practicable at that time of the future proposed development set out in the masterplan which of course must be the subject of future applications," he said.

He also rejected submissions from the applicants made around environmental impact mitigation measures and on-site back-up generators.

In relation to the application taken by Mr McDonagh, the court found he did not have standing to bring proceedings.

It said he does not live in the physical proximity to the site in issue in Athenry and is based in Dublin.

He did not participate in the planning process before Galway County Council or the Board of Appeal, the court also noted.

Mr Justice McDermott also found that there had been significant non-disclosure and lack of candour in these proceedings by Mr McDonagh in relation to his interest in challenging the decision to permit the development which has not been satisfactorily explained.

Mr McDonagh had previously been involved in trying to develop a data centre on lands in Co Wicklow.

He also rejected the grounds put forward by Mr McDonagh in his application. 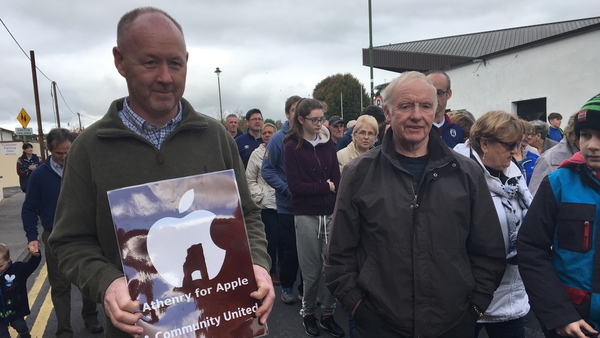 Rally held in Athenry in support of Apple data centre