The number of homeless families living in emergency accommodation across the State continues to rise although there has been a slight decrease in the numbers in Dublin.

Newly-published figures show there were 1,442 families without a home and living in accommodation such as hotels and B&Bs in August, up from 1,429 in July.

The figures also show that for the first time the number of children living in emergency accommodation has surpassed 3,000; the number now stands at 3,048. 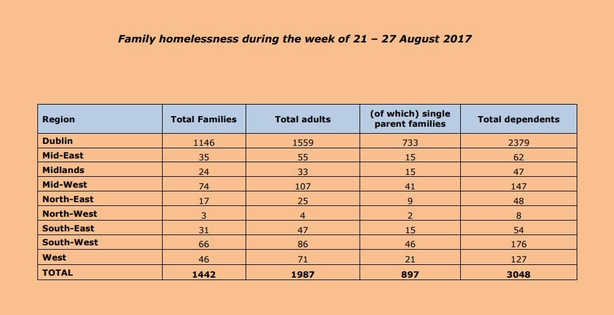 The biggest increase was in the mid-west, where the number of homeless families rose from 50 in July to 74 in August.

There was also a notable increase in the number of single-parent families homeless in the capital, from 733 to 770.

Minister for Housing Eoghan Murphy said that while progress has been made in dealing with the homeless situation, it still remains a major issue.

Limerick was a particular black spot, he said, but added that he was confident new measures due to come on stream there over the coming months will provide some much needed solutions.

The Simon Community has called on Minister Murphy to urgently publish the review of Rebuilding Ireland so the Government's commitment to tackling the crisis can be properly analysed.

Speaking on RTÉ's News at One, Simon Community spokeswoman Niamh Randall said it is really shocking that there are now over 3,000 children homeless in Ireland.

While she welcomed the fact there was a small drop in the numbers of families homeless in Dublin, she said the total national figure is up 25%.

Ms Randall said it is a nationwide crisis with action needed at local and regional levels.

She said there needs to be a focus on prevention measures and on keeping people in their homes.

Simon has called for the repair of "the broken private rented sector", substantial increase of the scale and speed of delivery of social and affordable housing, and much improved initiatives to make empty homes and vacant lands across the State available for people in desperate need of housing.