A strong storm killed eight people and injured at least 67 in western Romania as winds of up to 100km/h also brought destruction to parts of Serbia and Croatia, officials said.

Road and rail traffic in parts of Romania was halted by fallen trees.

Several hospitals, schools and apartment buildings had roofs damaged and dozens of towns and villages were left without electricity.

Some of the casualties were people strolling outside or coming out of supermarkets, the emergency services said.

A group of tourists was stranded for an hour in a chairlift in the northern county of Maramures.

In Serbia, a man went missing on his boat on the Danube river near Belgrade and six people, including a five-year-old child, were injured by falling trees. 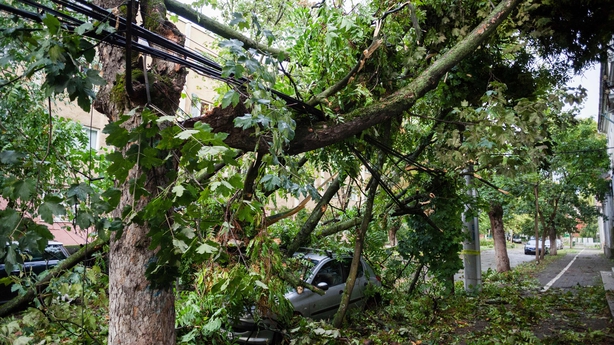 In Croatia, flooding brought traffic to a standstill in several coastal towns.

"The entire medical sector is focused on the injured."

He said the government would help support the communities hit by the storm.

Nicolae Robu, mayor of the Romanian city of Timisoara spoke to local TV station Digi24 as he was surveying the scene outside.

"There are dozens of trees on the ground, roads blocked, we are out of electricity and water. There are roofs torn off houses, apartment buildings. There are overturned trucks. I've never seen anything like this."