US Defense Secretary Jim Mattis has that the United States was not out of diplomatic solutions with North Korea.

His statement comes just hours after President Donald Trump tweeted that "talking is not the answer."

The U.S. has been talking to North Korea, and paying them extortion money, for 25 years. Talking is not the answer!

When asked by reporters before a meeting with his South Korean counterpart at the Pentagon if the United States was out of diplomatic solutions with North Korea, Mr Mattis replied: "No."

"We are never out of diplomatic solutions. We continue to work together, and the minister and I share a responsibility to provide for the protection of our nations, our populations, and our interests," Mr Mattis added.

Earlier today the US called for "concerted action" by the international community to pressure North Korea into abandoning its banned nuclear and missile programmes by fully enforcing economic sanctions.

US disarmament ambassador Robert Wood, addressing the UN-sponsored Conference on Disarmament, said: "The goal of using such sanctions is to pressure the government of North Korea to abandon its prohibited programs and activities, not to punish the people or economy of North Korea or other countries."

Senior military officials from South Korea, Japan and the US made lengthy technical presentations on North Korea's weapons programmes to the Geneva forum.

North Korean diplomat Ju Yong Chol attended and told Reuters that he would deliver a 'right of reply' at the end of the session. 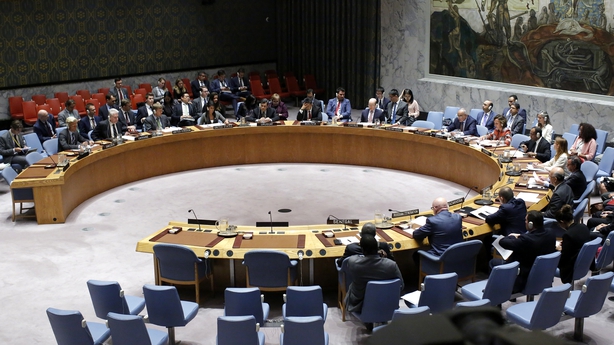 The UN Security Council has denounced North Korea's latest missile test, unanimously demanding that Pyongyang halt the program after a rocket was fired over Japan into the Pacific.

The 15-nation body maintained its unity after Kim Jong-Un's latest provocation, with China and Russia agreeing to sign up to a statement condemning his isolated regime's action.

But the US-drafted statement, while noting that the test contravened several previous Security Council resolutions, will not immediately lead to new or tightened measures against North Korea.

Still, diplomatic sources told AFP that the speed with which the members had reacted underlined their determination to remain united.

"The Security Council stresses that these DPRK actions are not just a threat to the region, but to all UN member states," said the statement, issued after closed-door talks at UN headquarters.

"The Security Council expresses its grave concern that the DPRK is, by conducting such a launch over Japan as well as its recent actions and public statements, was deliberately undermining regional peace and stability."

The Council demanded that North Korea - already the target of seven rounds of UN sanctions that have done little to quell Mr Kim's nuclear missile ambitions - obey all existing resolutions.

This would mean the North "abandon all nuclear weapons and existing nuclear programs in a complete, verifiable and irreversible manner, and immediately cease all related activities".

Pyongyang must not "conduct any further nuclear tests or any further provocation; and abandon any other existing weapons of mass destruction in a complete, verifiable and irreversible manner".

Finally, the body "welcomes efforts by Council members, as well as other states, to facilitate a peaceful and comprehensive solution through dialogue".