Speaking in Carndonagh yesterday, Mr Varadkar said: "You have to see it to understand the scale of the damage that has been done".

He said that it was remarkable that no one was killed or injured.

Asked if he could assure people everything that has to be done will be done, the Taoiseach said: "absolutely, I'm satisfied with the response so far but that needs to be sustained and escalated in the coming days".

Mr Varadkar said that additional funding will be made available to Donegal County Council for repairs.

The Taoiseach also mentioned a number of other humanitarian assistance schemes available to home and business owners and said that there will be a very strong Government response to support the people of Donegal.

Yesterday, Minister of State with responsibility for Flood Relief Kevin 'Boxer' Moran has pleaded with insurance companies not to blacklist areas devastated by flooding.

Mr Moran was speaking after an inter-departmental meeting to coordinate a response to this week's flooding in Donegal.

Describing the area as a "disaster zone", Mr Moran said it is too early to put a cost on the clean-up operation.

He estimated that as many as 400 or 500 homes could have been affected by the severe flooding in Donegal alone. 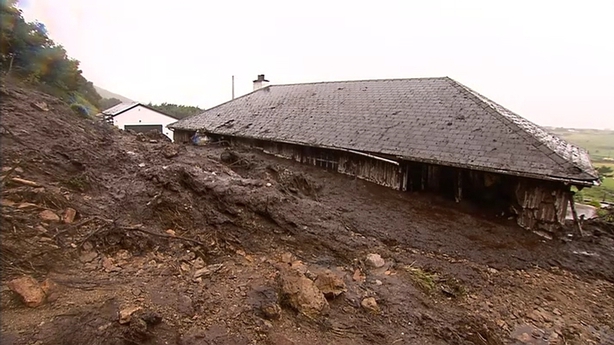 CEO of Insurance Ireland Kevin Thompson has said the priority is helping those affected by flooding and urged people to contact their insurance company foe help.

He said Insurance Ireland is working with the Government to maintain and increase flood cover in defended areas, where flood defenses have been installed.

A status yellow rainfall warning was in effect for the county with further spells of heavy rain forecast until 6pm yesterday evening.

A rainfall warning was also in place for Galway, Leitrim, Mayo and Sligo until 3pm.

Officials from the Departments of Transport, Social Protection, Environment and OPW met at the Custom House to discuss the best way to support Donegal County Council.

Mr Moran said the clean-up operation is going to be enormous, adding that the people of Donegal feel like they are being left behind and whatever can be done for them needs to be done fast. 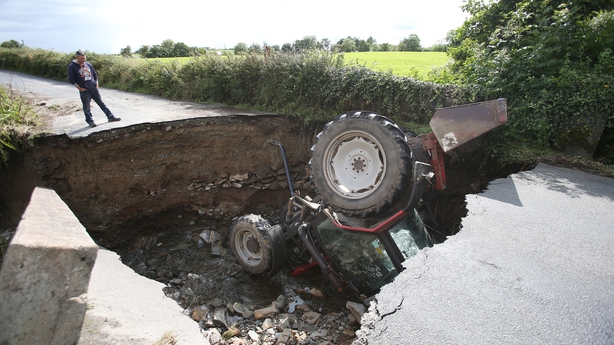 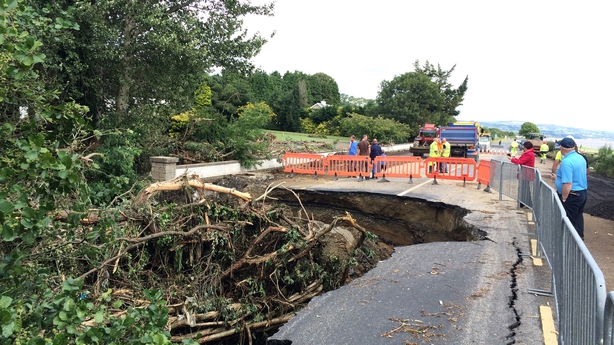 The Army was deployed to Inishowen to help with the clean-up, where around 200 homes have been affected.

In a statement, the Defence Forces said that 35 members of the 28 Infantry Battalion were deployed to assist with flood relief efforts in Co Donegal.

It is currently operating in three locations: Buncrana, Burnfoot and Carndonagh.

Minister of State with responsibility for Defence Paul Keogh said more personnel will be sent to assist Donegal County Council if necessary.

He said that life needed to be brought back to normality for the people affected.

The Red Cross has said that the Government requested an emergency humanitarian response scheme "to assist small businesses, community, voluntary and sporting bodies affected by the devastating floods."

In a statement, it said that the details of the scheme are not known yet but "it is anticipated that Government will make an announcement concerning these details next week."

It said that a scheme for householders affected by the floods is already in place and anyone who needs assistance can call the Buncrana INTREO office at 074-936-4600 or the Ballybofey INTERO office at 074-913-0490.

The Red Cross will administer a flood relief scheme for small businesses affected.

Government Chief Whip Joe McHugh said the scheme is a "humanitarian support contribution towards the costs of returning business premises to their pre-flood condition".

Six main bridges and many smaller ones as well as numerous stretches of road have also suffered damage. 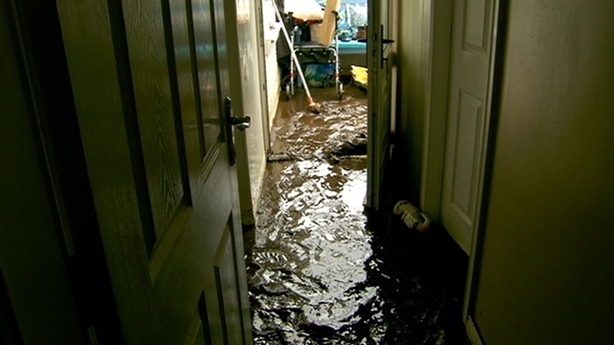 Mr Kehoe defended the time it took to respond to the flooding.

He said the damage had to be assessed first and "like anything people don't just fall out of the sky. There has to be coordination and work has to be carried out. This is about getting people back to normality in Donegal and they very much welcome this."

He said he will be visiting one of the affected areas, Buncrana, today.

As some residents are provided with emergency funds following Tuesday’s storm, the damage across the north west is laid bare pic.twitter.com/0yr30imzTG

Emergency income support payments have been made to some of those affected by flooding in the county under the Humanitarian Assistance Scheme, the Department of Social Protection said yesterday.

They payments, to cover immediate costs including food, clothing and personal items, are the first stage of the approach to administering payments under the scheme.

The second stage involves the replacement of white goods, furniture and other essential household items.

A department spokesperson said these payments cannot be made until flood water abates and houses dry out and the full extent of damage is known.

The third stage of the process is to identify longer-term financial support or works required.

It says it could take some time before this can start, and it will involve a cross departmental/agency response.

Fianna Fáil's environment spokesperson said the Government needs to put a lot of pressure on insurance companies to make sure that where there is a limited risk, insurance should be provided to those in flood-affected areas.

Clare TD Timmy Dooley said the State also had to look at particular areas where people could not get flood insurance cover and should provide a level of insurance and support for those people.

He said he had seen situations with homes devastated by bad weather where insurance companies would pay out once and then refuse at a later stage to insure those homes, even where flood defences had been put in place and been seen to work.

Mr Dooley also said climate change was having a significant impact on weather patterns, and the Government needs to act to to tackle it.

For anyone feeling emotionally overwhelmed as a result of the heavy flooding, a dedicated HSE Helpline for Flooding has been established and is available from 9am to 5pm on 074-916-7558.