Finnish police have said they are treating a stabbing rampage that killed two people as terrorism.

Police shot and wounded a knife-wielding suspect in yesterday’s attack, arresting him minutes after an afternoon stabbing spree at a Turku market square.

Police have raised the number of injured in the attack from six to eight. Both victims were Finnish, while the injured included two Swedish citizens and an Italian.

The suspect has been identified as an 18-year-old Moroccan man who arrived in Finland in 2016 and "has been part of the asylum process."

The attacker appeared to specifically target women during the spree.

Five people were arrested in a Turku apartment overnight as part of the investigation into the attack. Four of those arrested were also Moroccan citizens.

"There was a raid and we have now six suspects in custody, the main suspect and five others," detective superintendent Markus Laine of the National Bureau of investigation said.

"We are investigating the role of these five other people but we are not sure yet if they had anything to do with (the attack)... We will interrogate them, after that we can tell you more. But they had been in contact with the main suspect," Mr Laine said.

Police have not confirmed the identity of the suspect, but Mr Laine said investigators were "pretty sure" they knew who he was. 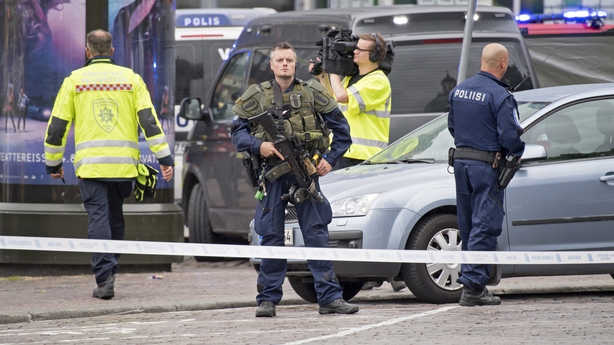 Media reports in Finland said police believed the suspect had picked his victims at random, but Mr Laine could not confirm that.

Police have said it was likely the suspect acted alone, but added they were looking for "other possible perpetrators."

Central Turku was swiftly cordoned off after the attack, which occurred just after 2pm Irish time, although the area was reopened several hours later.

Finland also raised its emergency readiness across the country after the stabbing, increasing security at airports and train stations and putting more officers on the streets.

In June, Finland's intelligence and security agency Supo raised the country's terror threat level by a notch, from "low" to "elevated", the second notch on a four-tier scale.

It said at the time it saw an increased risk of an attack committed by the so-called Islamic State group.