US authorities are investigating the outbreak of violence in Virginia following a white nationalist rally that killed one person and injured more than 30 yesterday, presenting US President Donald Trump with a major domestic challenge.

The violence in the Southern college town of Charlottesville yesterday was widely condemned, with many politicians and activists on both the left and right also criticising Mr Trump, a Republican, for waiting too long to address it and when he did so, failing to explicitly condemn the white-supremacist marchers who ignited the melee.

However, the White House said in a statement today that Mr Trump's remarks yesterday condemned all forms of violence and bigotry, including neo-Nazi groups and the Ku Klux Klan.

"The president said very strongly in his statement yesterday that he condemns all forms of violence, bigotry, and hatred, and of course that includes white supremacists, KKK, neo-Nazi, and all extremist groups," the White House said. "He called for national unity and bringing all Americans together." 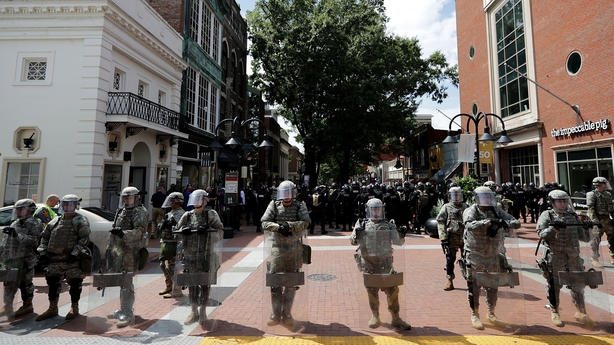 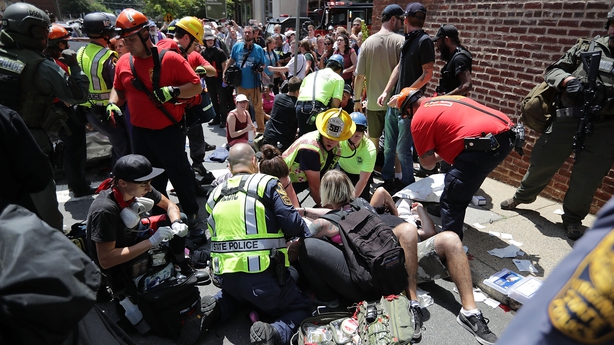 The violence has put fresh pressure on the Trump administration to take an unequivocal stand against that segment of his political base. Some rightists have claimed allegiance to him.

Mr Trump said yesterday that there was more than one side to the Charlottesville incidents.

"We condemn, in the strongest possible terms, this egregious display of hatred, bigotry and violence on many sides," he told reporters at his New Jersey golf course, without specifically mentioning or faulting the role of white nationalists.

1:2 There should be no place in society for racism, white supremacy and neo-nazis.

Virginia police have not yet provided a motive for a man ploughing a car into a crowd of people objecting to the white nationalists, but US attorneys and the FBI have opened a civil rights investigation into the crash, an FBI field office said.

Four people were arrested in the violence, including James Fields, a 20-year-old white man from Ohio being held in jail on suspicion of driving the car, killing a 32-year-old woman and injuring 19 others, five of them critically.

"Absolutely we are going to have further demonstrations in Charlottesville, because our constitutional rights are being denied," said Jason Kessler, identified by civil rights groups as a white nationalist blogger. He did not specify when.

Mr Kessler organised the 'Unite the Right' rally in Charlottesville against a plan to remove a statue to Confederate war hero Robert E. Lee from a park, saying those who came in support will not back down.

Virginia Governor Terry McAuliffe, a Democrat, declared an emergency and halted the white nationalist rally planned for yesterday but that did not stop the violence.

"Please go home and never come back," was Mr McAuliffe's message for the white supremacists, delivered at a news conference.

The planned rally stemmed from a long debate in the US south over the Confederate battle flag and other symbols of the rebel side in the Civil War, which was fought over slavery.

The Charlottesville violence is the latest clash between far-rightists, some of whom have claimed allegiance to Mr Trump, and the president's opponents since his January inauguration, when black-clad anti-Trump protesters in Washington smashed windows, torched cars and clashed with police, leading to more than 200 arrests.

About two dozen people were arrested in Charlottesville in July when the Ku Klux Klan rallied against the plan to remove the Lee statue. Torch-wielding white nationalists also demonstrated in May against the removal.