The crew of the LÉ William Butler Yeats have rescued 149 people from a rubber vessel off the coast of Libya.

The boat carrying the migrants was discovered 47 miles northeast of the Libyan capital, Tripoli. 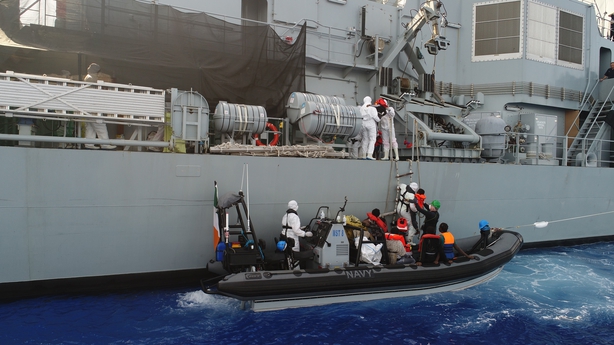 The rescue operation began at 8.45am and all migrants were on board the Irish naval vessel by 11.15am, where they are receiving food, water and medical treatment.

Commissioned in October 2016, the LÉ William Butler Yeats was deployed to the Mediterranean on 14 July 2017.

Before today, it had rescued 109 migrants who were in distress at sea.

Meanwhile the Libyan navy has ordered foreign vessels to stay out of a coastal "search and rescue zone" for migrants headed for Europe, a measure it said targeted NGOs.

"We want to send out a clear message to all those who infringe Libyan sovereignty and lack respect for the coastguard and navy," Libyan navy spokesman General Ayoub Qassem told a news conference in Tripoli.

General Abdelhakim Bouhaliya, commander of the Tripoli naval base where the conference was held, said: "No foreign ship has the right to enter" the area without authorisation from the Libyan authorities.

Libya has "officially declared a search and rescue zone", Gen Bouhaliya said, without specifying the scope of the exclusion zone.

Gen Qassem said the measure was aimed against "NGOs which pretend to want to rescue illegal migrants and carry out humanitarian actions".

He urged humanitarian organisations to "respect our will... and obtain authorisation from the Libyan state even for rescue operations".

Italy has also said it wants to keep a tighter rein on NGOs helping the multinational search and rescue operation by making them sign up to a new code of conduct.

Its crew is suspected of taking on board migrants delivered directly to them by people traffickers, and of allowing the smugglers to make off with their dinghies to be used again.

The Libyan coastguard has accused NGOs of aiding people traffickers in their lucrative business.