She also accused Mr Varadkar of being "unhelpful" by making comments about the Irish border after the UK leaves the European Union.

Mrs Foster said she was looking forward to meeting Mr Varadkar on Friday when he makes his first visit to Northern Ireland since taking over as Taoiseach.

Speaking following an event at the former Maze Prison outside Lisburn, the DUP leader rubbished Mr Varadkar's hope that the UK will U-turn on Brexit and remain within the European Union.

The Taoiseach said this week he remained "hopeful" that Brexit would not happen.

However, Mrs Foster told reporters this was "disrespecting" the wishes of the British people.

"He may be hopeful but that is disrespecting the will of the British people. Brexit is going to happen. We are leaving the European Union.

Mr Varadkar angered unionists when he said Ireland would not help the UK design an economic border for Brexiteers. 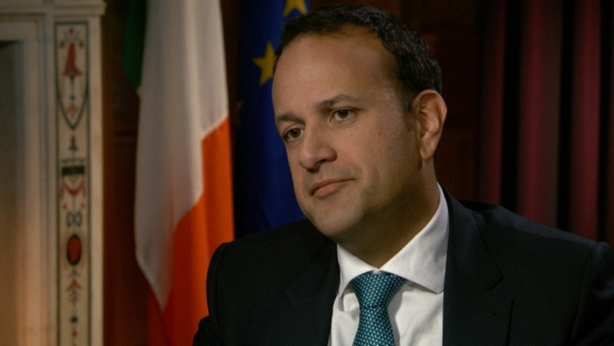 Last week, he said the Government does not want any sort of economic border on the island of Ireland after Brexit.

Mr Varadkar said if Britain wants to put forward technological solutions that is up to them, but the Government would not do that work for them.

Mrs Foster said the comments were "not helpful" and added that the Irish Government "should reflect on whether they are being helpful to the process here in Northern Ireland or not".

She continued: "They have made various interventions recently in relation to Northern Ireland politics. It would be better if we focused on finding solutions to what is in front of us. We want to find ways forward.

She added that she will be raising a "number of issues" with Mr Varadkar on Friday and that she was "looking forward to the meeting".

Party colleague Jeffrey Donaldson said Mr Varadkar has made a "retrograde step" by taking a back seat on the issue and should instead be proactive and design a solution that is suitable for both sides of the border.

He said: "When does huffing in the corner solve anything?  He needs to be pragmatic.

"There is no point in huffing over the outcome of the Brexit referendum. We all have to rise to the challenges that face Northern Ireland and that means Dublin taking a seat at the table helping to design a solution.

"If the Taoiseach is not up for that that we will have to go ahead an design a solution."

Fine Gael Senator Neale Richmond said the Irish Government is not taking a back seat, claiming it has been "hyperactive" in preparing for possible Brexit outcomes.

Speaking on RTÉ Drivetime, he accused the DUP of taking the "ultimate back seat", adding "they've taken it so far to the extent that they won't even form their own executive in Northern Ireland and we've yet to see the influence that the DUP MP's supposedly have over the Tory government in London".

He said for the DUP to say that the Government has taken a back seat is "very, very disingenuous".

He said the Government has yet to see a single concrete proposal from the DUP on how they see relations on the island post-Brexit.

The Government must negotiate for Northern Ireland to be designated with special status within the EU, a report by an Oireachtas committee has said.

The report focuses on the potential impact of Brexit on the prospects of a united Ireland.

The study from the cross-party committee on the implementation of the Good Friday Agreement makes 17 recommendations.

As well as seeking special status for Northern Ireland, it says there should also be clarity as to whether the North will still be eligible for EU structural funds once the UK departs the European Union.

The report recommends that there should be no passport controls on the borders between North and South.

It says that a New Ireland Forum should be set up - much like the one that was around in the 1980s - to address unionists' concerns.

Just what impact this report will have on upcoming Brexit negotiations and how it will be received in the unionist community is as of now unclear.

Speaking at the publication of the report, Fianna Fáil Senator Mark Daly described recent comments by the Taoiseach on the issue of the border post-Brexit as "megaphone diplomacy". He said he did not think such remarks were of assistance.

Senator Daly said the idea of the Brexiteers coming up with an idea of how the border will be managed is foolhardy.

He said the EU has said that imaginative solutions needed to be found, and if we were waiting on the Brexiteers for that, we could be waiting a long time, he said.

The chair of the committee, Sinn Féin TD Kathleen Funchion said perhaps Mr Varadkar could have been more diplomatic in his tone but she said that it cannot be stressed enough that there cannot be a return of a hard border.

Speaking earlier on RTÉ's Morning Ireland, Senator Daly said one of the benefits of reunification would be for the economy.

He said: "From the 17 recommendations in the report, it is quite clear we need to do a lot in advance of any referendum.

"One of the findings was that there would be a benefit for the all-island economy of €35.6 billion in the first eight years after reunification.

"Again those figures were supplied and that report was done prior to the Brexit referendum."

The recommendation to establish a New Ireland Forum, he said, would address the concerns of unionists in the event of a referendum or reunification.

However, he said even if unionist representatives did not attend a forum their concerns would still be addressed.