More than one million malnourished children aged under five in Yemen are living in areas with high levels of cholera, a charity has warned.

Save The Children has begun to send health experts to the worst hit areas.

The scaling up in response came after latest figures show that a deadly cholera epidemic that started in April 2015 has infected more than 425,000 people and killed almost 1,900.

Save the Children said children under 15 are now accounting for about 44% of new cases and 32% of fatalities in Yemen, where a devastating civil war and economic collapse has left millions on the brink of starvation. 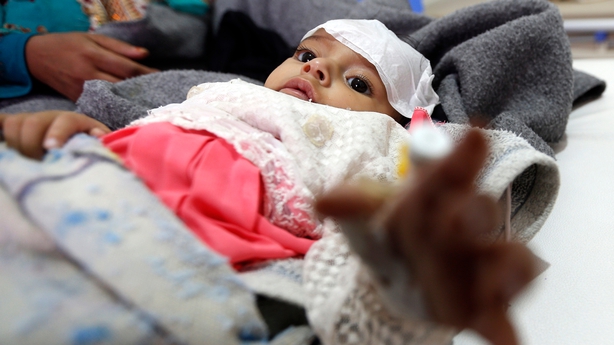 "The tragedy is both malnutrition and cholera are easily treatable if you have access to basic healthcare," said Tamer Kirolos, Save the Children's Country Director for Yemen.

"But hospitals and clinics have been destroyed, government health workers haven't been paid for almost a year, and the delivery of vital aid is being obstructed."

Cholera, which is spread by ingestion of food or water contaminated by the Vibrio cholerae bacterium, can kill within hours if untreated.

The cholera outbreak prompted the United Nations last week to revise its humanitarian assessment and it now calculates 20.7 million Yemenis are in need of assistance, up from the previous figure of 18.8 million in a population of 28 million.

Oxfam has projected the number of people infected with cholera could rise to more than 600,000 - "the largest ever recorded in any country in a single year since records began" - exceeding Haiti in 2011.

Save the Children said it currently operates 14 cholera treatment centres and more than 90 rehydration units across Yemen but was scaling up its response and sending more health experts to the worst hit areas.

The charity said new analysis of district level data revealed more than one million malnourished children aged under five - including 200,000 with severe acute malnutrition – were living in cholera hot-spots.

Millions are malnourished in Yemen where famine looms, the United Nations says.