Israeli Prime Minister Benjamin Netanyahu has called for the execution of a Palestinian man who stabbed three Israelis to death last week as tensions rose over new security measures at a Jerusalem holy site.

"The death penalty for terrorists - it's time to implement it in severe cases," he said while speaking with family members of the victims, a video of which was posted on Mr Netanyahu's Twitter account.

"It's anchored in the law. You need the judges to rule unanimously on it, but if you want to know the government's position and my position as prime minister - in a case like this, of a base murderer like this - he should be executed. He should simply not smile anymore."

A 19-year-old Palestinian broke into a home in a Jewish settlement in the occupied West Bank on 21 July and stabbed four Israelis during a Sabbath dinner, killing three of them.

He was shot and wounded by a neighbour, an off-duty soldier.

The stabbings came after protests and clashes over new Israeli security measures at Jerusalem's Haram al-Sharif compound, known to Jews as the Temple Mount, installed after a July 14 attack nearby killed two policemen.

Five Palestinians were killed in clashes on 21 and 22 July.

Palestinians have ended that boycott and entered the sensitive Jerusalem holy site for the first time in two weeks after Israel removed controversial security measures there, potentially ending a crisis that sparked deadly unrest.

Thousands of worshippers streamed into the Haram al-Sharif compound, known to Jews as the Temple Mount, for afternoon prayers.

The site includes the Al-Aqsa mosque and the Dome of the Rock. 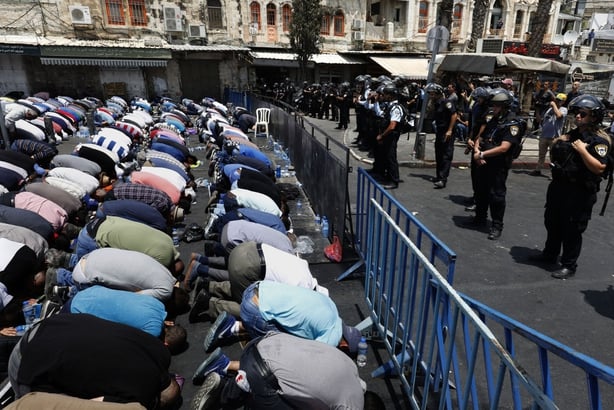 A last-minute confrontation threatened to derail the planned end of the boycott as Israeli police were keeping one of the gates leading to the holy site closed.

The gate is where two Israeli policemen were killed on July 14, prompting the new security measures.

Police later opened the gate and Palestinians stuck to their plan to end the boycott.

A tense standoff had been under way between Israel and Muslim worshippers at the holy site despite the removal of metal detectors on Tuesday.

Newly installed railings and scaffolding where cameras were previously mounted were also cleared early today, after which police said all new security measures had now been removed.

Muslims had refused to enter the compound and prayed in the streets outside after Israel installed the new security measures.

In response to the removal of the security measures, Muslim authorities called on worshippers to return.

Israeli authorities said the metal detectors were needed because the July 14 attackers smuggled guns into the compound and emerged from it to attack the officers.