The White House has revealed that US President Donald Trump met his Russian counterpart, Vladimir Putin, for a second, previously undisclosed meeting at the G20 summit in Germany earlier this month.

After a brief greeting at the start of the two-day summit and a two-hour bilateral meeting with their foreign ministers on 7 July, Mr Trump and Mr Putin also chatted over dinner on the final night of the summit.

The disclosure has raised questions about what the pair talked about, who was present and why the meeting was not previously mentioned.

The Trump administration has been beset by allegations that the president's closest advisers colluded with Russia to win the 2016 election.

Mr Trump's eldest son, Donald Jr, recently released emails showing he held a meeting during the campaign with figures connected to the Russian government, hoping to get damaging information on his father's election rival Hillary Clinton.

Mr Trump took to Twitter to criticise the suggestion that there was anything improper about his dinner chat with Mr Putin, declaring the story "fake news" and that all the G20 leaders and spouses were invited to the dinner.

Fake News story of secret dinner with Putin is "sick." All G 20 leaders, and spouses, were invited by the Chancellor of Germany. Press knew!

The Fake News is becoming more and more dishonest! Even a dinner arranged for top 20 leaders in Germany is made to look sinister!

A second White House official denied there was a "second meeting" between Mr Trump and Mr Putin, describing a "brief conversation at the end of a dinner".

"The insinuation that the White House has tried to 'hide' a second meeting is false, malicious and absurd," the official said. 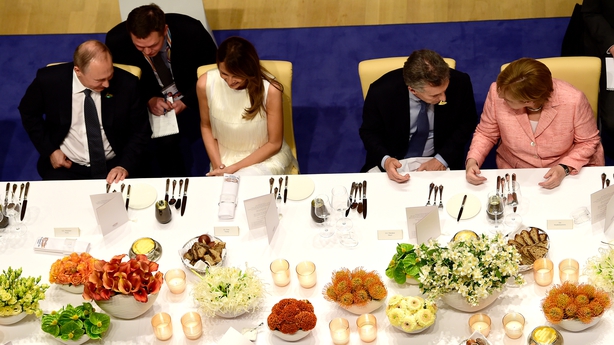 US media have reported that the meeting lasted an hour.

The White House also rejected concerns that Mr Trump was not with any other US officials and used Mr Putin's translator.