The Taoiseach has said the Public Accounts Committee is not the place to discuss the policing of the Jobstown water charges protest.

Speaking in Galway tonight, Leo Varadkar said he respected the independence of the PAC and the rights of its members to ask questions.

However, he said the committee's role was to follow public money and its key task at the moment was to investigate financial transactions in Templemore.

Mr Varadkar said he would be much more interested in the committee's findings in that regard than, what he called, "the drama" of TDs questioning other people.

Garda Commissioner Nóirín O'Sullivan told the Public Accounts Committee today that an internal garda review of the Jobstown case will not include the court process.

Members of the Oireachtas Justice Committee earlier expressed concern that the Public Accounts Committee had overstepped its responsibilities by asking gardaí about justice and not financial issues.

It is understood concerns have been expressed to two members of the Public Accounts Committee that the breath test controversy and Jobstown trial do not fall within their remit.

This evening, the PAC chairman said today's session was focusing on garda resources for the year 2015 and therefore the events at Jobstown were within its remit.

Speaking on RTÉ's Six One News, Seán Fleming said that while some members wanted to raise the issue of the court case subsequent to the events in Jobstown, and the performance of the Garda at this case, he accepts that this is outside the remit of the PAC and of the remit of the Dáil.

The PAC chairman said that the fixed penalty points issue was very much a matter for the PAC.

He said in some cases people were charged and paid fines and these fines have to be returned by the court services with the co-operation of the gardaí and as this is a financial issue, the PAC would pursue this to the end.

Mr Fleming said he was quite happy that the Justice Committee would look at the issue of breath testing and mouthpieces and the cost of that exercise as this was a policing issue rather than a financial issue.

He said that previously, Sgt Maurice McCabe had been asked to appear before the committee regarding speeding fines and that there is now a commission of investigation as a result of the PAC reviewing the issue relating to fines.

The PAC chairman said the committee had signed off on its report on finances at the garda training college at Templemore and this is expected to be published next Tuesday afternoon. 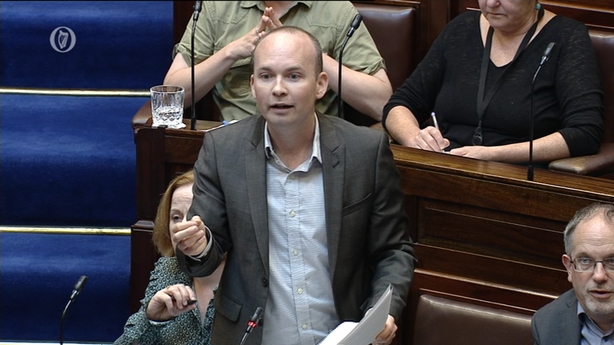 Separately, comments made by Paul Murphy in the Dáil yesterday have been referred to the Oireachtas Committee on Procedure by the Ceann Comhairle.

Ceann Comhairle Seán Ó Fearghaíl had referred the remarks made by the Solidarity TD to the parliamentary legal adviser last night following an initial review of the Dáil transcript.

Following consultation with the legal adviser, Mr Ó Fearghaíl sent the matter to the committee "for its consideration and decision".

During Leaders' Questions yesterday afternoon, Mr Murphy used Dáil privilege to accuse gardaí of committing perjury during his trial for the false imprisonment of former tánaiste Joan Burton and her adviser Karen O'Connell.

Mr Murphy called for a public inquiry to examine the difference between what was said by gardaí during the Jobstown trial, and what video evidence showed.

He also said "there is a public interest in a public inquiry" into the trial.