A Dublin man has said that he was left with multiple fractures to his jaw following an attack by a group of men minutes after professional footballer Jeff Hendrick dragged him from a taxi stopped at traffic lights. 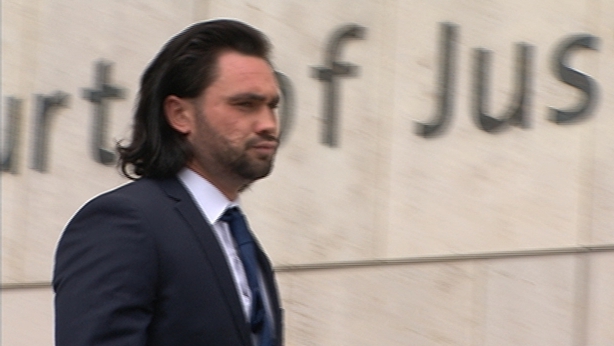 A co-accused, Jonathan Doran, 26, of Kilmore Close, Artane, also pleaded not guilty to the charge of violent disorder.

Republic of Ireland international Jeff Hendrick is on trial charged with violent disorder and with using or threatening to use violence pic.twitter.com/UpqW0cFKp6

In addition Mr Doran, who works as a barber in Ratoath, Co Meath, pleaded not guilty to a charge of assault causing harm to Darren McDermott at the junction of Montague Street and Harcourt Street on the same date.

Mr McDermott said he had been in Krystle nightclub in Dublin city earlier that night when he bumped into two men he knew who were in the company of Mr Hendrick.

He said he initially mixed well with the group but at some point the footballer's demeanour changed.

"To this day I don't know why his attitude changed," Mr McDermott said before he told the jury that eventually Mr Hendrick became so aggressive that bouncers intervened and escorted him off the premises.

He remained in the nightclub for about ten minutes before leaving with his friend. He could see Mr Hendrick waiting outside. "Straight away he tried to get back at me," Mr McDermott said.

He told the jury he found it very intimidating and tried to get back into the nightclub but the bouncers did not want any further trouble and pointed him in the direction of a nearby taxi rank.

Mr McDermott got into the front passenger seat of a waiting taxi which travelled towards St Stephen's Green before it came to a stop at a set of lights.

He told the jury that Mr Hendrick appeared at his window and the rest of the car was surrounded by a group of his friends.

"They were banging on the bonnet and window. They wanted me to get out. Mr Hendrick was telling me to get out and was saying he would kill me.

"I offered the driver €50 or €100 to drive on but he said he didn’t want any hassle and he unlocked the door," Mr McDermott said.

He told the jury at this point Mr Hendrick opened the car door and pulled him from the taxi.

"I tried to calm him down. I thought it was getting a little more serious. I was afraid I was going to get a bit of hiding," Mr McDermott said before he added that he then made the decision to run.

"I was afraid for my safety... afraid I was going to be assaulted or even worse. I sprinted off. I remember hitting the ground and people on top of me laying into me."

He told Diarmuid Collins BL, prosecuting, that he could not see who was chasing after him and he did not know how he ended up on the ground.

He described kicks to his head, face, chest and back. "I was curled in a ball trying to protect my head as much as possible. It was just smack after smack ... digs." Mr McDermott continued.

He told the jury that he then heard some girls' voices screaming to get off him and the assault came to an end.

"If they hadn't arrived God knows what condition I would have been in. My jaw was wobbly, some of my front teeth were smashed and my bottom teeth were loose. I never once hit any of them," he told the jury.

He called his friend, the gardaí arrived a short time later before he got a taxi to Beaumont Hospital near his family home.

Mr McDermott said he had three fractures to his jaw, four of his teeth were smashed and others were loose. He was told he had to get emergency surgery and a transfer was arranged to St James's Hospital.

He said he had made contact with his wife, who brought him to St James's Hospital, after dropping their children to his mother's home.

He got plates inserted into his jaw and spent a couple of days in hospital.

He had to drink through a straw for a couple of weeks and is still getting medical attention.

Earlier Mr Collins advised the jury that Mr Hendrick may be known to them as a professional footballer "who has represented his country with a distinction".

He said the jurors had taken an oath to give a true verdict without prejudice and whether they thought the accused was a talented footballer or they had no interest in football at all, they should not allow this to influence their decision.

Judge Martin Nolan warned the jury against researching anything to do with the case on the internet.

The trial continues before Judge Nolan and a jury of seven men and five women.