Tens of thousands of people have taken part in the annual 'Rally for Life' march in Dublin this afternoon.

It was organised by groups who want to preserve the Eighth Amendment. They said around 70,000 people took part in the march today.

The groups say that any referendum on abortion will fail.

Niamh Uí Bhriain, of the Life Institute, said the rally was being held to tell Taoiseach Leo Varadkar that any referendum on abortion will fail and that today is the real Citizens' Assembly.

She said today is a springboard for a series of events to be held between now and a referendum to show the Government that the pro-life campaign is active.

As the rally made its way down O’Connell Street it was met by pro-choice groups campaigning to repeal the Eighth Amendment.

Mr Varadkar has promised to hold a referendum on abortion after the Citizens' Assembly recommended the controversial law be replaced.

Yesterday, Minister for Health Simon Harris said he would like to see a referendum on the issue take place next year. 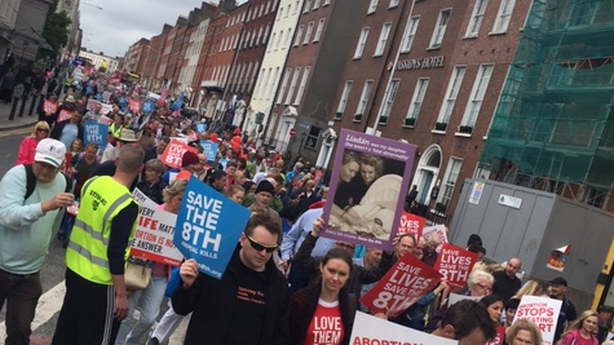