The jury in the Jobstown false imprisonment trial has been sent home and will resume its deliberations tomorrow.

The jury was told some legal issues will need to be dealt with in the morning and they should suspend their deliberations until 2pm.

Six men are on trial charged with falsely imprisoning the then tánaiste, Joan Burton, and her assistant Karen O'Connell during a water charge protest in Jobstown on 15 November 2014.

The jury has been urged to be fearless in its deliberations and to put aside strong views or sympathy in relation to the political climate that led to the protest at the centre of the trial.

The 11 members of the jury began deliberating on verdicts after an eight-week trial.

Addressing the jury this morning, Judge Melanie Greally said she did not expect the jury members to be deaf or blind to the political background or the emotion generated by the debate on water charges.

She said they may feel a natural sympathy for the predicament of the accused men, may know them or the prosecution witnesses, and like or dislike them.

They may also be concerned about the consequences of their decision.

However, she said she urged them in their decision making "to be fearless and to put aside your sympathies or strong views on the political climate that led to the protests. You should approach it in an analytical and dispassionate manner."

Judge Greally said the jury must analyse the evidence in relation to each accused on its own merit and seek to identify their individual state of mind and their intent. The view they form against one accused should not influence their view against the others.

None of the accused is charged with violence and none is responsible for the conduct of others acting violently on the day.

However, she said it would be utterly wrong to suggest the violence of others was not a relevant circumstance of the case.

She said as citizens of this republic Ms Burton and Ms O'Connell had a Constitutional right to personal liberty and were entitled to come and go as they pleased.

The six men on trial had a right to protest peacefully and express opposition and anger over water charges. These rights were not competing rights, they co-existed and the law largely succeeded in ensuring this, the judge said.

She said the right to protest, even if exercised peacefully, cannot be at the expense of personal liberty. 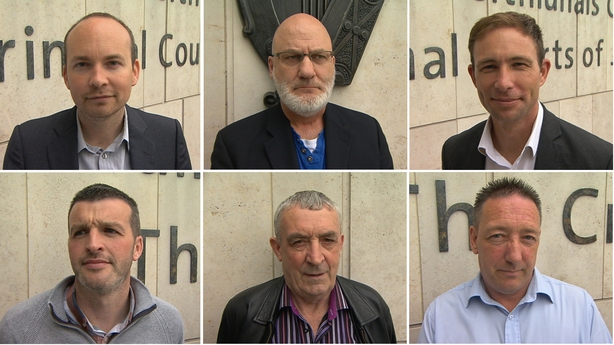 Judge Greally said a critical aspect of the jury's decision was to decide whether or not the protest was peaceful.

If the violence was any more than sporadic, maintained by a small number of people throughout the day it could not have been peaceful, she said.

She said the jury must not confuse anger and hostility with violence, but the accused and their counsel describing the protest as peaceful was not good enough.

"The mere fact of saying something is peaceful does not make it peaceful," she said.

If the jury concludes the protest was peaceful it must assess the reaction of gardaí on the day and answer a number of questions about how it was handled.

If they conclude it was not peaceful at all they must view the garda conduct in that context.

If it was a violent protest then the actions of each of the accused in impeding Ms Burton's exit must be viewed in that light.

"The rights and entitlements of freedom of expression only extend to peaceful protest. If this was not a peaceful protest then many of the criticisms of the gardaí become difficult to sustain," she said, adding: "If you conclude there was a risk to her safety then the actions of others in impeding her departure become impossible to justify."

If it was violent protest that does not determine the guilt or innocence of each of the accused however, the jury must decide the role played by each of them.

They must decide if there had been total restraint of the two women, was the car being obstructed or were the occupants the targets.

The fact that the crowd followed when they were moved from the Avensis and a sit down protest ensued was a factor for the jury to consider, Judge Greally said.

"Did the acts of the accused and others who impeded the vehicle totally restrain them from leaving Jobstown, which was their wish, or was it merely a delay or obstruction? Could they reasonably have escaped, was getting out and walking out of Jobstown an option or was reversing up the road an option?"

The law dictates the means of escape must be without danger to the persons confined, she said.

The judge said if the jury was not satisfied there was total restraint that was the end of the matter.

If they decided there was, they must go on to assess the issue of the intent of each of each of the accused and whether or not it was their intention to keep Ms Burton in Jobstown.

The jury must also consider aspects of the garda evidence where there were misstatements or inconsistencies with what gardaí said in their statements and their evidence.

"Were they calculated to cast aspersions on Paul Murphy? Is this the establishment coming down on Paul Murphy or others for orchestrating a successful campaign against water charges? Do you agree this is what this is all about?"

She said if the jury was inclined to agree with this, that he was being prosecuted not for what he did but for who he is then does that extend to the others on trial. While two of the others were county councillors who would be known locally but were without a national profile, the remaining three were ordinary citizens.

"So how far does that argument actually go?" the judge asked.

The judge said the video footage is a "significant component" but they should not disregard witness testimony.

Some of the garda testimony was "not borne out by the footage and contradicted what was said".

She said that type of discrepancy may affect their view and was a matter for them to assess inaccuracies in witness testimony and its effect on the issues to be decided.

Judge Greally said the trial was not about curtailing the right to protest as it was a valued right that already existed with limits.

The jury's verdict was not about sending out a message, it was about establishing if those limits were exceeded.

It was accepted that protests may be angry and unruly in order to be effective but tolerance ceases at the point the law is violated.

"The law confirms no exemption on any protester to do what is unlawful. Unlawful conduct does not become lawful because it happened at a protest," she said.

Judge Greally said in analysing the evidence the jury must be satisfied about the ingredients of false imprisonment.

At the start of the trial in April all six pleaded not guilty to falsely imprisoning Ms Burton and her adviser, Ms O'Connell in Jobstown in Dublin on 15 November 2014.

The prosecution says Ms Burton and Ms O’Connell were trapped in Garda cars for up to three hours during the protest.

Defence counsel argued that the men had taken part in a peaceful political protest and could not be held responsible for the violence of others that day.

They said their clients had obstructed a vehicle but their actions did not amount to false imprisonment.

Any threat to their safety was not caused by the six men on trial, they said.

The jury has now retired to consider its verdict.

The charges against 50-year-old Ken Purcell from Kiltalown Green in Tallaght were dropped at an earlier stage in the trial following legal argument in the absence of the jury.