German Chancellor Angela Merkel has described British Prime Minister Theresa May's offer on the rights of EU citizens after Brexit as "a good start" but said many other issues related to Britain's departure from the bloc still need to be resolved.

Mrs May told a European Council summit in Brussels that any EU citizen living in the United Kingdom for five years would be given "settled EU status".

"Theresa May made clear to us today that EU citizens that have been in Britain for five years will retain their full rights. That is a good start," Ms Merkel told reporters at an EU summit.

"But there are still many, many other questions linked to the exit, including on finances and the relationship with Ireland. So we have a lot to do until [the next EU summit in] October." 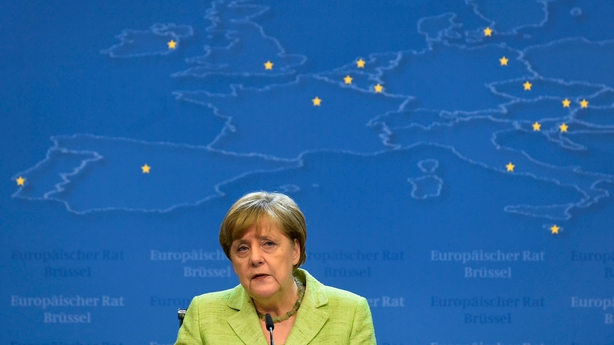 The new immigration status announced by Mrs May would allow EU citizens to remain in the UK and to avail of health, education and other benefits after Brexit.

It is understood Mrs May indicated that the proposal would be adopted only if the same rights were granted to UK citizens living in other EU states.

During a working dinner with other EU leaders at a Brussels summit, Mrs May gave "a clear commitment that no EU citizen currently in the UK lawfully will be asked to leave the country at the point that the UK leaves the EU", a British government source said.

Mrs May set out what she said was a "fair and serious" offer on protecting the rights of an estimated three million Europeans living in Britain, whose futures have been thrown into doubt by its shock vote last year to leave the 28-nation bloc.

But the Conservative leader also put herself on a collision course with the EU with the plans.

She did not set a cut-off date for those who are eligible for permanent residence and rejected a demand for the European Court of Justice to oversee the process and any resulting disputes.

In its position paper on EU rights published earlier this month, the European Commission said the court should have "full jurisdiction".

But Mrs May is determined to remove Britain from the ECJ's reach, saying that "taking back control" of its laws is one of the reasons Britons voted for Brexit.

"The commitments that we made to EU citizens will be enshrined in UK law and enforceable through our highly respected courts," the British government source said.

Varadkar says Ireland does not want UK to leave EU

Taoiseach Leo Varadkar has said the door remains open for the UK to stay in the European Union.

Arriving in Brussels for his first European Union summit, Mr Varadkar said Ireland did not want the UK to leave the EU, the single market or the customs union.

"That is ultimately a decision for them, however, and that may change. Countries can take positions, often very strong positions, they are often negotiating positions, and yet the final outcome might be more favourable," he said.

"While Britain says they intend to leave the customs union and the single market, they also say they want a Free Trade Agreement, and while many of the elements of a free trade agreement, while not being the same as the customs union, may not be that far from that."

The Taoiseach was speaking following a bilateral meeting with the President of the European Council Donald Tusk.

Asked if Britain should be given more flexibility on the timetable of the negotiations, so that both sides could get into the future trading relationship more quickly, Mr Varadkar said that the outcome was more important than the timetable.

"I would rather have a good deal for Ireland in time, than one that doesn't work for us in a shorter time period.  When it comes to issues relating to the border... it will be difficult to determine the final shape of that until we know what the new trade arrangements are between the UK and the EU," he said.

Ireland's objective remained that there should be no economic border between Northern Ireland and the Republic of Ireland.

"Brexit is a British policy, it's not an Irish policy. But we have objectives, some strong objectives too, just as the British may have their views on how to Brexit should take shape, we have ours.

"We want to retain the normal trading relationships there has been between the two islands for many decades."

Ireland's objective remained that there should be no economic border between Northern Ireland and the Republic of Ireland.

"Brexit is a British policy, it's not an Irish policy. But we have objectives, some strong objectives too, just as the British may have their views on how to Brexit should take shape, we have ours.

"We want to retain the normal trading relationships there has been between the two islands for many decades."

Mr Tusk has hinted that the door remains open for the UK to remain in the EU despite the start of Brexit talks.

Mr Tusk quoted John Lennon's Imagine at a press conference in Brussels, saying "you may say I'm a dreamer, but I'm not the only one" while addressing the prospect of the UK remaining in the bloc.

He said the European Union was "well prepared" for the "difficult" Brexit negotiations, which formally started in the Belgian capital on Monday.

Mr Tusk said: "The Brexit negotiations started three days ago. It is a most difficult process, for which the EU is well prepared.

"You can hear different predictions coming from different people about the possible outcome of these negotiations - hard Brexit, soft Brexit or no deal.

Donald Tusk quotes John Lennon on his hopes for the EU pic.twitter.com/3SU0F6o9Mv

"Some of my British friends have even asked me whether Brexit could be reversed and whether I could imagine an outcome where the UK stays part of the EU.

"I told them that, in fact, the European Union was built on dreams that seemed impossible to achieve. So, who knows. You may say I'm a dreamer, but I'm not the only one."

Arriving at today's summit, Mrs May said there has been a "constructive" start to the Brexit talks.

She reaffirmed her intention that the future of the 3.2 million EU nationals in the UK and 1.2 million UK citizens in the EU should be one of the first issues to be resolved.

"We will be going into negotiations. Those have started constructively," she told reporters.

"That's been an important issue. We've wanted it to be one of the early issues to be considered in the negotiations That is now the case. That work is starting."

Mr Varadkar makes his first appearance at a European Council meeting almost one year to the day since the British referendum sent Europe juddering into a crisis.

One year on, Britain is in a state of turmoil, while the EU27 has a new found confidence.

The populist wave triggered by Brexit and reinforced by US President Donald Trump threatened to engulf the EU, but the threat has petered out with the defeat of anti-EU parties in the Netherlands and then France.

The European economy, after years of crisis and stagnation, is now growing faster than that of the US.

Mr Varadkar is expected to raise the Paris Climate Agreement, security, as well as economic and trade issues.

According to a Government statement, he will also thank EU leaders for prioritising Irish issues in the Brexit negotiations, but he will recommend that the talks move quickly towards Britain's future trading relationship with the EU.