The Association of Secondary Teachers in Ireland has voted to suspend its campaign of industrial action, which has left members earning less than teachers in other unions for several years.

has voted by two-to-one to suspend its industrial action over the Lansdowne Road Agreement and Junior Certificate reform.

The union's rejection of the Lansdowne Road Agreement had left members paid less than teachers in other unions, as well as suffering other penalties including an increment freeze, the loss of supervision and substitution payments and other pay restoration measures.

The union had been particularly concerned about the failure of the LRA to address the contentious issue of lower pay for new entrants.

The vote was held at a special convention to discuss whether to suspend its campaign of industrial action over Junior Cycle reforms and lower pay for new entrants.

This convention, which over 400 delegates are attending, is highly unusual in that it has been called not by the ASTI leadership but by a petition of grassroots members unhappy with the union's strategy.

Rejecting the Lansdowne Road Agreement has left members earning significantly less than their counterparts in other teacher unions. They have also lost out on benefits like faster access to permanent contracts.

The ASTI campaign of industrial action has failed to resolve their grievances over issues including two-tier pay and Junior Certificate reform.

In addition, around 1,200 members have quit the union so they can benefit from the Lansdowne Road Agreement. 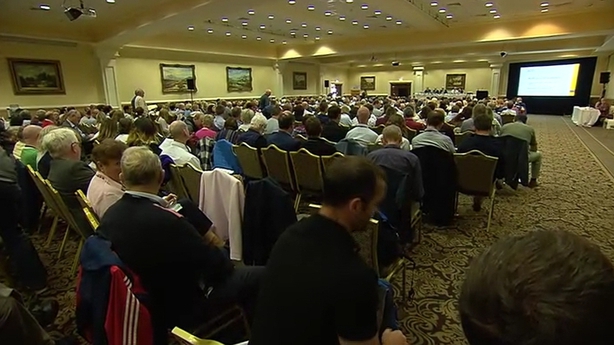 800 signatures were required to force a convention to consider suspending all industrial action - the petition organisers have said they got twice that number.

The latest pay deal agreed earlier this week is not on the agenda.

The Teachers Union of Ireland and the Irish National Teachers Organisation have already recommended rejection because it does not equalise pay for new entrants, a point likely to arise during today's intensive debate.