At least 20 Afghan policemen were killed early this morning when Taliban fighters stormed multiple security outposts in the volatile southern province of Zabul, as the insurgents escalate their annual spring offensive.

Local officials made desperate calls to journalists to seek attention as they were unable to get hold of senior authorities for help, media reported, highlighting the disarray in security ranks.

A district official said that at least 15 others were wounded in the fighting.

The Taliban claimed responsibility for the attack on their website.

Taliban militants launched their annual "spring offensive" in late April, heralding a surge in fighting as the US tries to craft a new Afghan strategy and NATO considers sending more troops to break the stalemate against the resurgent militants.

The offensive normally marks the start of the fighting season, though this winter the Taliban continued to battle government forces.

An attack on a military base in the northern city of Mazar-i-Sharif left at least 135 security forces dead last month.

The Pentagon has asked the White House to send thousands more troops to Afghanistan to break the deadlocked fight against the Taliban.

US troops in Afghanistan number about 8,400 today, and there are another 5,000 from NATO allies, who also mainly serve in an advisory capacity, a far cry from the US presence of more than 100,000 six years ago. 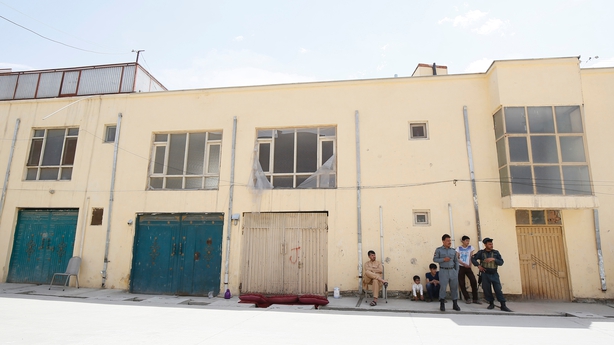 A Finnish woman is missing and presumed to be kidnapped in the attack late yesterday on the guest house (above) run by a Swedish charity called Operation Mercy.

No one has so far claimed responsibility for the incident, the latest in a series of assaults on aid workers in Afghanistan.

"A Finnish lady was kidnapped from police district (three) last night at 11.30pm. A German lady and an Afghan guard were killed," interior ministry spokesman Najib Danish said on Twitter.

A Finnish foreign ministry spokeswoman confirmed that a Finnish citizen has been kidnapped in Kabul.

"We can confirm that we know about this but we are not giving details at the moment. The only thing we can say is it is not known who the kidnappers are," said spokeswoman Karoliina Romanoff.

Operation Mercy's director Scott Breslin told local news agency TT that he was holding a crisis meeting over the incident.

Operation Mercy is known to work with local Afghan communities in areas such as reducing infant mortality and women's empowerment.