Fire services and Defence Forces personnel have been stood down for the night, after calm conditions helped the effort to bring a major forest fire in Co Galway under control.

Combined with the work of the Air Corps, Coillte, the Army and Galway Fire Service, the fire has now been controlled on all three fronts.

While there are a number of smaller fires burning in the 4,000 hectare site, the agencies involved in the operation are hopeful they can stay on top of the situation and continue working to fully extinguish the remaining pockets.

However, they have warned that windier conditions could hamper this effort in the coming days.

Thousands of litres of water were dumped onto the affected areas throughout the day and by late afternoon, there was a noticeable reduction in the volume of smoke from the main fire sites.

Coillte says the fire could flare up again and it is maintaining a round the clock survey of the vast forest.

Our crews are continuing to support local fire services to battle the forest fires in Galway. @defenceforces pic.twitter.com/XvnomiKEzN

Over a third of the woodland in Cloosh Valley has been destroyed in recent days and an estimated 2,000 hectares of adjoining bogland was also burned.

Meanwhile, the HSE has issued an advisory notice for people who may have been exposed to smoke from the fire in recent days.

The Department of Public Health in the western region has said that people may experience discomfort or other respiratory symptoms as a result of increase pollution levels.

It comes as data from NUI Galway revealed the extent of air pollution caused by the forest fire.

Wind carried the smoke across Galway city and as far east as Oranmore and Claregalway, some 35km from Cloosh Valley. 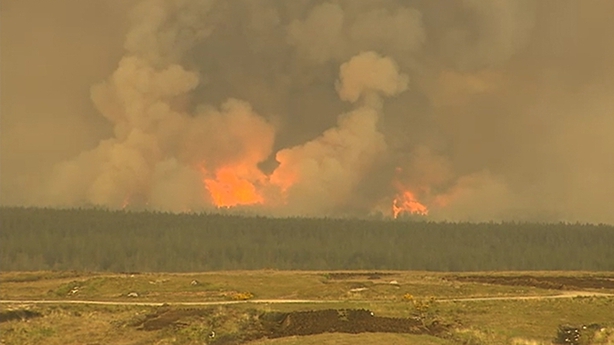 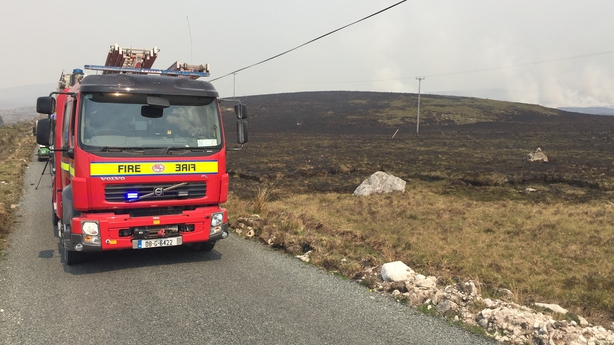 Air Corps Captain Sean McCarthy said today has been more successful for crews trying to tackle the fire, but he warned that dry conditions could cause the blaze to grow.

Speaking on RTÉ's Drivetime, Capt McCarthy said two helicopters are assisting in the operation. One helicopter is dropping water and the other is acting as a command and control aircraft.

A Coillte official is also on board to gather a better assessment of the fire, and target specific areas.

He said: "The type of fire when it hits the forest you're seeing flames of up to 60 feet.  The frontal fire in some places is eight kilometres long so its quite extensive.  Today seems to be a small bit better but because of the dry conditions it could flame up again at any time." 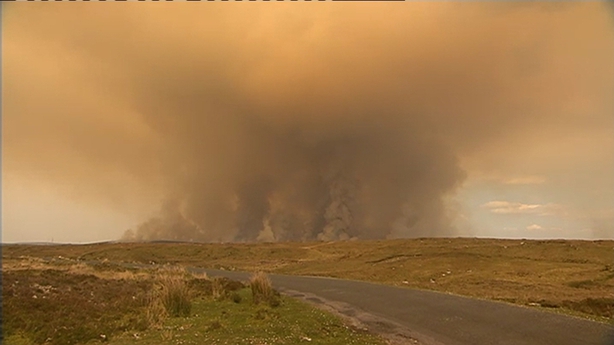 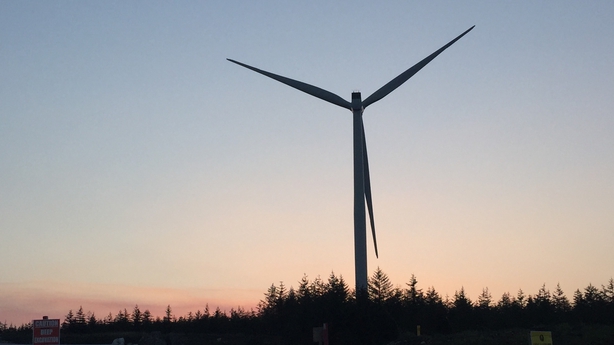 The Minister of State with responsibility for the Office of Public Works has said the fires in Galway will require a whole Government response.

Sean Canney was responding to a question from the Independent and Galway West TD Catherine Connolly who said the fires currently raging are five times the size of the Phoenix Park.

Ms Connolly asked what the minister and the department had planned in response to what she described as "an emergency".

The junior minister, from the Galway East constituency, said emergency services and response units are dealing with the fire.

He pointed out that the issue of emergency response is undertaken by the Department of the Environment and said he would bring Ms Connolly's concerns back to Government.

"There's more than one department involved so there'll have to be a whole of Government response," he said.

He also said it was not known yet how the fires started, but he expressed hope that the cause of the fires will be found.

"The most important thing is to get the fires under control and put out", he said.