The Taoiseach has hailed the outcome of the extraordinary European summit in Brussels as "a huge endorsement of the Government's approach to the Brexit negotiations and a clear recognition of the unique and specific challenges facing Ireland".

Enda Kenny said the declaration on Irish unity, in which the EU affirms that in the event of a successful referendum Northern Ireland would automatically rejoin the EU, was hugely important.

"It is important to provide reassurance that it does not undermine any provision in the Good Friday Agreement, and if the provision on unity by peaceful means and by consent and democratic means is invoked at some time in future, EU membership is assured, and is now unanimously accepted by the European Council to endorse that legal base," said Mr Kenny.

He added: "Let me be clear, this is not about triggering any mechanism. I've been very consistent in my view that the conditions for a referendum do not currently exist. But an acknowledgement of the principle of the potential within the Good Friday Agreement is hugely important."

Asked if this would be his last EU summit, Mr Kenny noted that the heads of government had, during the meeting, thanked the outgoing French President Francois Hollande for his work at EU level. He said he would deal with the issue at the level of his own political party.

The leaders of the 27 remaining EU member states agreed, within minutes, the formal negotiating guidelines which will govern the Brexit talks, expected to begin in June.

The President of the European Council Donald Tusk said the issue of the future trading relationship between the EU and UK would only be addressed, after the UK had given guarantees that the rights of EU citizens in the UK would be safeguarded.

He said: "The Commission has prepared a full list of rights and benefits that we want to guarantee for this affected by Brexit. We need a serious British response. I want to assure you if the UK offers real guarantees for our citizens, we will find a solution rapidly."

The Taoiseach said there was a recognition that once the question of the UK's financial liabilities on withdrawal was agreed, the EU should "move on" and talk about the future relationship as soon as sufficient progress is made.

He also stressed the need for a smooth transition period before a free trade agreement came into effect.

Speaking as he arrived at the summit earlier, Mr Tusk said: "We need to remain united as the EU 27. It is only then that we will be able to conclude the negotiations, which means that our unity is also in the UK's interest.

EU spokesman says the Declaration on potential Irish unity referendum was submitted by the Irish government and "will be formally adopted."

"As for now I feel strong support from all the EU institutions, including the European Parliament, as well as all the 27 members states," he added.

In letter to the EU27 leaders ahead of the summit, Mr Tusk said the three priorities in the negotiations would be the rights of EU citizens living in the UK, what Britain would have to pay on leaving, and the question of Ireland.

As he arrived at the summit, French President Francois Hollande said Britain must pay the price of Brexit because it is "the choice they made".

Britain was excluded from the meeting.

Former Northern Ireland first minister David Trimble said this morning that there was no need to include a passage on the possibility of a united Ireland, saying it would only "stir up nationalist feeling".

The former Ulster Unionist leader told BBC Radio 4's Today programme: "From the point of view of the Irish there is no need to introduce this, it's actually playing games with nationalist feelings and I wonder why the Irish Government is doing this and why Europe is going along with it."

He went on: "Stirring up nationalist feeling is not necessarily a wise thing to do, but what I would like to do is to focus on the real issue, and the real issue in terms of the border is tariffs." 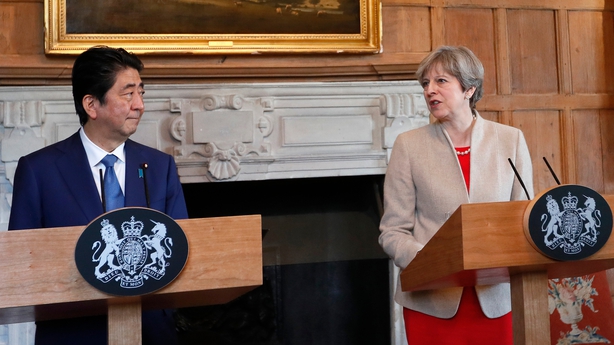 Japanese Prime Minister Shinzo Abe said that if the UK left the European Union with an abrupt change of rules for businesses then it could cause confusion for international firms.

The leader of the world's third largest economy said he hoped there would be a transition period to ease the UK's exit from the EU that is scheduled for March 2019.

"Japan supports a strong UK and a strong Europe," Mr Abe told reporters at a briefing in London.

Mr Abe held talks with Mrs May at Chequers, the country house of the British PM.

"It is necessary that the firm solidarity of Europe as a whole is maintained while ensuring a smooth and successful Brexit," Mr Abe said.