No accurate time limit can be placed on the conclusion of an independent public inquiry into Stormont's botched green energy scheme, its chairman has said.

The Renewable Heat Incentive inquiry was set up after it emerged the ill-fated scheme had left the Stormont executive facing a potential overspend bill of £490m.

Sinn Féin has refused to return to power with the Democratic Unionists' leader Arlene Foster until the investigation was completed.

Retired judge Patrick Coghlin plans to begin hearing from witnesses about the RHI in the autumn.

He has already written to 125 people and organisations compelling the production of relevant documents and is to contact around 2,000 beneficiaries seeking information.

The Stormont departments for the economy and finance and the energy regulator Ofgem will be core participants in the inquiry.

Mr Coghlin said he had been promised full independence by those who appointed him in the dying days of the last administration and warned he would not compromise rigour for the sake of a speedy conclusion.

He added: "This inquiry will fearlessly examine the evidence relating to the RHI scheme and it will do so without interference from any quarter in order to establish the facts about the scheme and those connected to it." 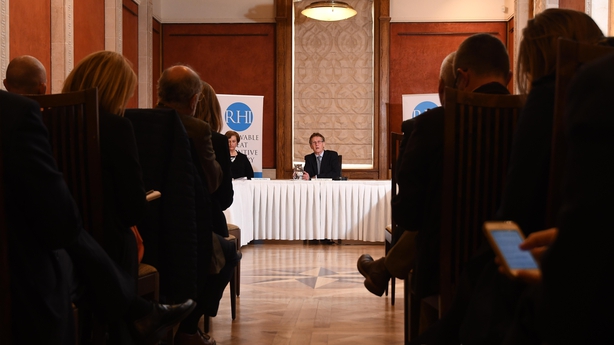 Mrs Foster established the scheme in 2012 when she was enterprise minister.

Flaws in its design meant recipients were able to earn more in state subsidies than it cost to run their eco-boilers.

When the "cash for ash" crisis flared during the winter, Sinn Fein's Martin McGuinness asked Mrs Foster to stand aside.

When she refused, he resigned as deputy first minister and collapsed Stormont's powersharing institutions.

A new coalition government has still not been formed two months on from the subsequent snap Assembly election in March.

Sir Coghlin said: "It is undoubtedly in the public interest that the inquiry proceeds expeditiously, avoiding the unnecessary exploration of irrelevant or marginal issues, but expedition in itself will not be permitted to bear adversely on the thorough and effective discharge of the RHI inquiry's investigatory function.

"I doubt very much whether the public concern which gave rise to the establishment of this inquiry would be allayed by a process which was subsequently revealed to have proceeded upon an inaccurate basis of fact largely because the thoroughness of the investigation had been sacrificed in the interest of a speedy conclusion.

"At this early stage it remains the case that it is simply not possible or useful to attempt to place any accurate timescale on the length of time which the inquiry will take to complete its work."