Taoiseach Enda Kenny has said agreement on the new National Maternity Hospital will conclude in the next number of weeks and the hospital will provide the standard of care women are entitled to expect in this day and age.

Mr Kenny said if issues arise that mean women need hospital treatment "it will be on the campus of St Vincent’s".

"What we want to do is put in place a legally waterproof situation where it will be perfectly clear for everybody that what's at stake here is proper world class facilities for expectant mothers and pregnant women," he said.

The Taoiseach added that the breathing space requested by Minister for Health Simon Harris on the issue has been given to him.

This morning former master of the National Maternity Hospital Dr Peter Boylan resigned with immediate effect from its board.

Mr Kenny said the decision by Dr Boylan to resign from the board is one for himself.

Earlier this week, Dr Boylan refused to resign after publicly criticising the planned move of the hospital to the St Vincent's campus due to the deal giving ownership of the new tax-payer funded facility to the Religious Sisters of Charity.

Dr Boylan said he had resigned today from the board as it had become apparent there was no point in trying to influence it, as the board "seems to be blind" to the consequences of the decision to relocate to the lands at St Vincent's Hospital.

Speaking on RTÉ's News at One, he insisted any clinical practices that would take place on land owned by the Catholic Church - such as the potential liberalisation of the abortion legislation - will be subject to Canon law, rather than modern maternity practices.

Dr Boylan said the current board structure was not independent and almost designed to develop "friction and conflict".

He said while no legal agreement in place yet, the impression has been given that it has been "signed, sealed and delivered".

Board member and Sinn Féin councillor Mícheál Mac Donncha, who also voted against the re-affirmation of the agreement, said he believes that Dr Boylan was effectively forced to resign, which he said was very regrettable.

The board of the St Vincent's Healthcare Group has reiterated its support for the proposed relocation to the Elm Park campus.

Concern over NMH board meeting

Meanwhile, Dublin Lord Mayor Brendan Carr, who chaired last night's board meeting, has said he found the attitude of some of the senior members of the board astonishing.

At the three-hour meeting, the board endorsed its commitment to the hospital moving to the St Vincent's campus.

Councillor Carr said the initial decision to approve the move was made by a number of board members under duress.

Speaking on RTÉ's Morning Ireland, Mr Carr said he felt the meeting was held in a very "bullying and intimidatory way" and contempt was shown towards him.

Brendan Carr says some people at Holles Street board meeting told him they made the initial decision 'under duress' https://t.co/dkNOeAjGF2 pic.twitter.com/Jf7MlOrxkP

During the meeting, he said, no consideration was given to the main concerns raised in the media over the past couple of days.

He also objected to a letter circulated at the beginning of the meeting backing the planned move, signed by consultants at the hospital.

Mr Carr reiterated that the Government could issue a compulsory purchase order for the land in order to "take the heat out" of the argument. This, he said, was the "only way to go". 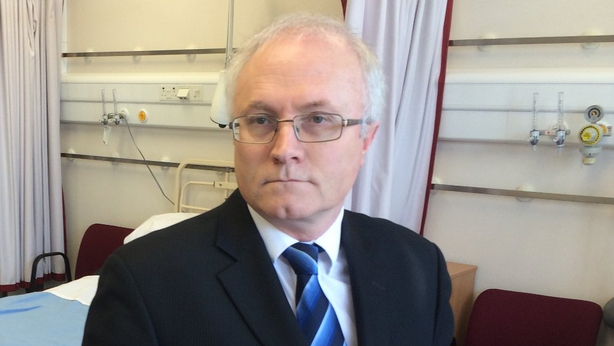 This controversy has started the debate about whether it is a good or a bad thing that the State funds voluntary hospitals that are owned by the religious orders. The question is should we no longer invest in these hospitals?

For example, the Mater hospital or the St Vincent’s group - you cannot pull funding overnight from these hospitals because they are major facilities treating tens of thousands of people every year.

It is a question that maybe needs to be looked at. If the State was to nationalise these facilities it would cost billions of euro. On one hand, that’s money that the health service needs on a day-to-day basis to run the service.

If planning permission is granted later this year and then the awarding of the contract, you could see the new National Maternity Hospital opening in about three or four years.

However, we saw how long it took to get the new children’s hospital going and we still have to see a brick of the new project to go down. But that project looks like it will proceed.

Meanwhile, Councillor Claire Byrne, who is a member of the NMH board, has said she did not witness any bullying or intimidating at last night's meeting, which she described as "terse".

She said the meeting was the first in three years that she had attended where the Lord Mayor was also present.

Cllr Byrne told RTÉ's Today with Sean O'Rourke she had attended the majority of meetings on the issue over the last three years.

She said she was satisfied that the Sisters of Charity would have no input into clinical decisions at the new hospital, that she had raised this as a concern over the last number of years and received reassurances every time that this would not happen.

In addition, Cllr Byrne said there has been little or no support between this, or previous, governments to end the relationship between Church and State.

The reality is, she said, that we need this hospital and the facility at Holles Street is not fit for purpose.

Around 24 board members attended the Holles Street meeting last night.

A majority of those in attendance re-endorsed the commitment to the deal, mediated last November by former Workplace Relations Committee chief Kieran Mulvey.

Three people voted against the endorsement to move the hospital, including Cllr Carr and Cllr Mac Donncha.

Labour leader Brendan Howlin said it is "hugely disappointing" that Dr Boylan has resigned from the board.

Speaking on the same programme he said Dr Boylan was told his responsibility was to the board and not the citizens of Ireland, the women who will use this facility.

Mr Howlin said: "if we have learnt anything from financial crisis, and other crises, it is that we need to listen and encourage debate and concerns should be raised and not be suppressed. That is what has happened here."

He said we need to have those points openly debated.

Mr Howlin said Ireland's health systems are democratically funded and controlled and they should not be subject to any ethos.

"I would like to see an agreement made with the Sisters of Charity to hand over the land, obviously for financial consideration, also taking into account the redress board monies due", Mr Howlin said.He said certainty is needed before the Dáil will vote to allocate €300m for this facility.