The St Vincent's Healthcare Group has said that any medical procedure, which is in accordance with the laws of the Republic of Ireland, will be carried out at the new national maternity hospital.

In a statement it said that in light of comments made by Dr Peter Boylan, the Board of St Vincent's Healthcare Group was compelled to respond to what it called "continued misinformation" concerning the medical care which will be available to women attending the new facility.

It said the clinical independence of the hospital will be enshrined in the Memorandum and Articles of the new facility, as agreed by it and Holles Street, in the agreement mediated by Kieran Mulvey.

The autonomy of the Board of the National Maternity Hospital at Elm Park will be provided for.

The St Vincent's Healthcare Group said that continuing to suggest that procedures currently undertaken at Holles St will not be available in the new maternity hospital is entirely false and without foundation.

The board of the group said it noted recent media reports in which the Department of Education confirmed that their shareholders, the Religious Sisters of Charity, do not have any outstanding liabilities to the taxpayer relating to the Redress Scheme.

However, speaking to RTÉ's Prime Time Dr Boylan said that while this evening's statement from St Vincent's referred to "current policy", he said that did not mean that it would be the same policy in the future.

He said the problem was with the ownership structure and a hospital built on religious land has to abide with rules of the Church.

The Master of Holles Street, meanwhile, defended the ownership structure of the proposed new maternity hospital and has insisted it has adequate powers to guarantee its independence.

Asked about Bishop Kevin Doran's intervention last weekend, she said the Bishop was not involved and was not aware of the detail of the negotiations.

Earlier Minister for State for Training, Skills and Innovation John Halligan said it was not appropriate for the former master of Holles Street, Dr Boylan, to be asked to resign from the board of the National Maternity Hospital in a text.

Dr Boylan has said he will not resign, after being asked to do so following his criticism of a Government proposal to build a new maternity hospital on the St Vincent's hospital site in Dublin and hand over ownership to the Sisters of Charity.

The hospital said Dr Boylan had a duty of loyalty to its board.

Tonight, the 25-page agreement between Holles Street Hospital and the St Vincent's Healthcare Group on the new National Maternity Hospital has been published this evening by the two hospitals.

Speaking to reporters in Dublin earlier, Mr Halligan also said he believed no religious order should have a controlling influence on the proposed facility.

Minister John Halligan says it was not appropriate for Dr Boylan to be asked to resign from the National Maternity Hospital board in a text. pic.twitter.com/YqJI1KK1cr

Professor Declan Keane, a former Master of Holles Street said he has absolutely no doubt that the current deal is going to give the hospital full clinical and financial autonomy.

Speaking on RTÉ's Six One, Prof Keane, who is currently Clinical Director of the maternity hospital and a member of the executive board, said the nuns will not interfere with the operation of the new facility and it will not be under any religious or ethnic influence.

"We've always thought that the most important thing that we will have is clinical autonomy and I have heard nothing from St Vincent's Hospital that would disagree with that," said Prof Keane.

Asked whether the concerns of Dr Boylan were unfounded, he said: "I believe they are".

Labour's Spokesperson on Health, Alan Kelly, said the only way the row over the new maternity hospital can be resolved is if the Minister for Health and his department ask the Sisters of Charity to gift the land, or an equivalent piece of land nearby, to the State.

Speaking on RTÉ's Drivetime, Mr Kelly said this would be most appropriate thing to do.

"If they did do so, it would certainly go a long way to deal with issues that went on in the past and the redress issue which we all know about," said Mr Kelly.

Dr Boylan has been highly critical of the plan that the Religious Sisters of Charity be given ownership of the new €300m taxpayer-funded hospital because it owns the land on which it is to be built.

The request for his resignation was by made by Deputy Chairman Nicholas Kearns via text message on Sunday.

A spokesperson from the hospital said Dr Boylan was asked by text to stand down from the board as that is the means by which he chose to communicate on Sunday with the Deputy Chairman and the Master of the National Maternity Hospital.

In his text message to Mr Kearns and Dr Mahony, Dr Boylan said he had tried to warn them. 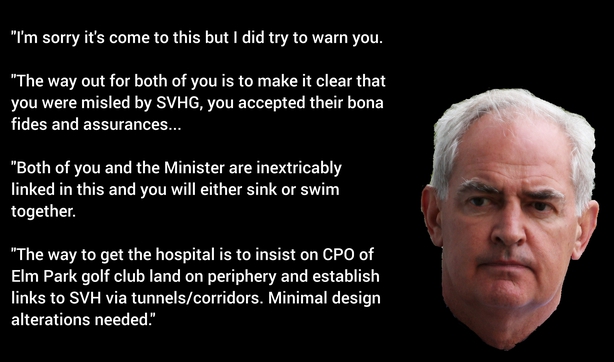 Mr Kearns replied to Dr Boylan: "Both the Master and I have received and read your text sent to us at 13.47 today.

"We are now asking for your immediate resignation from the Board of Holles St - both because of your public intervention to criticise and oppose the overwhelming majority decision of the Board taken in November last to approve the agreement reached with SVUH for the transfer of Holles St to Elm Park - a vote on which you abstained - and in addition because of the content of your text sent today.

"It's intimidatory tone is most regrettable.

"The Board will clearly require to be briefed on Wednesday as to the contents of your text communication if your resignation as sought is not forthcoming."

Speaking on RTÉ's Morning Ireland, Dr Boylan said he would not resign.

Dr Peter Boylan says he will not resign and says he feels a loyalty to the women of Ireland. pic.twitter.com/ylcRevFhad

Last Friday, Dr Boylan said he did not support the proposed arrangement to give ownership of the new hospital to the religious order, and expressed his reservations to his fellow board members over an extended period of time.

He said the shareholders of the National Maternity Hospital in Holles Street are the 100 governors who own the hospital in trust and who will need to agree the proposed arrangement.

Dr Boylan is one of those governors.

"To date the agreement has not been put to us for decision," he told The Irish Times.

Speaking on Morning Ireland last Thursday, Dr Boylan said it is inappropriate for the State to invest taxpayers' money into a new maternity hospital that would have a strong religious influence.

"Dr Boylan was a member of the NMH Board at all times during the six-month period of mediation which resulted in the agreement of 21 November 2016 to co-locate the National Maternity Hospital with St Vincent's University Hospital.

"The board was kept fully briefed on all developments by the negotiating team during that period.

"The decisive final meeting of the board overwhelmingly supported the agreement with 25 in favour, two abstentions (including Dr Boylan) and one vote against.

"Thereafter the agreement was approved by Government and planning permission was lodged.

"Last week, some five months after the agreement was approved, Boylan, without warning, consultation with or notification to the board, its chair or the Master of the hospital, went public in attacking the agreement.

"Board members have a duty of loyalty to the board on which they serve and for this reason his resignation has been sought."

Dr Boylan has said he does not feel he should resign and that his loyalty is to the women of Ireland.

He said it was wrong to effectively hand ownership of the maternity hospital to the Catholic Church, which would fundamentally disagree with some of the practices carried out in the hospital.

Dr Boylan says the new maternity hospital needs to be built but not unless the land is owned by the State or the National Maternity Hospital pic.twitter.com/kaIvxxTkbg

In addition he said he had told the board many times that this would not fly with the public, when it became known.

Dr Boylan said he abstained from a vote on the issue out of loyalty but he had stated objections to the decision on many occasions during the mediation period.

He added that he knew the vote would pass and he was waiting for a meeting of the governors to take place.

At this point, he said, he would make his objections known again.

He said that assurances that the hospital would be free of religious interference had been "blown out of the water" by Bishop Kevin Doran's statement at the weekend. 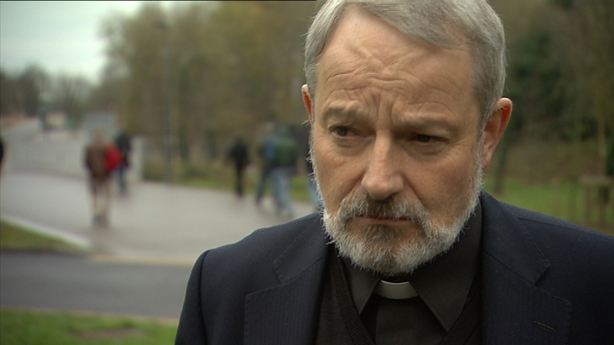 The bishop said that any healthcare organisation bearing the name Catholic has a special responsibility to Catholic teachings.

Dr Boylan said there was no question that the hospital needed to be built and the design was superb, but it should not go ahead in its current form.

"Unless the land is owned by the State or by the National Maternity Hospital, what'll happen is that the hospital will be built, and then, when it comes to - in five or ten years time - to admitting women and maybe doing abortions, doing whatever, suddenly they'll find you can't do that.

"Four members of a nine person board. It only takes one person to wobble. And then you say, no you can't do that, and they'll have to go to the Rotunda or the Coombe."

Also speaking on Morning Ireland, Minister for Arts, Heritage, Regional, Rural and Gaeltacht Affairs Heather Humphreys said the most important thing is that a new maternity hospital is built because it is desperately needed.

The Fine Gael TD said that the Government is committed to the project.

Meanwhile, Minister for State John Halligan has said it was not appropriate for Dr Boylan to be asked to resign in a text.

He said Dr Boylan is a very good man and has an opinion that he is entitled to and he should be treated with dignity and respect.

Mr Halligan said there should be no controlling influence whatsoever by any religious order on the new maternity hospital.

The board of Holles Street will discuss the controversy when it meets tomorrow.

Claim board was not consulted over request

A member of the NMH board has said the board was not consulted before Dr Boylan was asked to resign.

Mícheál Mac Donncha, a Sinn Féin councillor in Dublin, said this was wrong and Dr Boylan should not be asked to resign for expressing an opinion.

Mr Mac Donncha said he supported the proposal to co-locate the hospital at St Vincent's because, like the rest of the board, he was very much guided by Dr Rhona Mahony and Mr Kearns.

He said there was no question that the hospital was needed but that the question of governance and ownership needed to be re-examined.