The funeral of Captain Mark Duffy, who died when Coast Guard Rescue 116 helicopter crashed off the coast of Mayo, has taken place in Blackrock in Co Louth.

His remains were found in the cockpit of the helicopter last Friday.

Amongst the mourners were President Michael D Higgins, Catholic Primate of All Ireland Eamon Martin and the Taoiseach's aide de camp.

A lone bagpiper led the hearse through a guard of honour to St Oliver Plunkett Church overlooking the water in Blackrock, Co Louth. 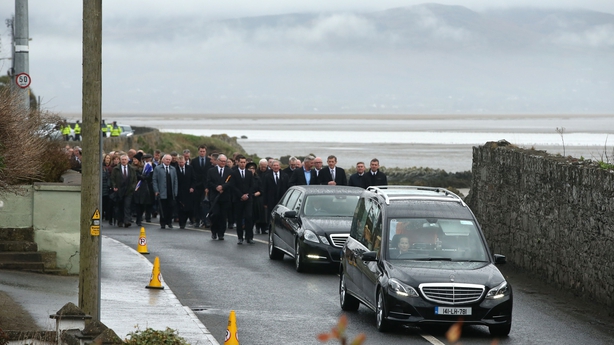 His coffin was followed by his wife of 17 years Hermione and their two children Esme and Fionn.

Capt Duffy's uncle Fr Stephen Duffy was the main celebrant during the funeral.

He said this is more than a family tragedy; it is a community catastrophe.

He described his nephew as kind, humble in spirit and pure in heart, and a man with a terrific sense of humour.

Symbols of Capt Duffy were brought to the altar in memory of him, including his wedding bands, a trio of rings he gifted to his wife for her 40th birthday, a selection of cards given to him by his children over the years, and his helmet.

The congregation was told how he loved flying his helicopter and was proud to do so.

His colleagues on Rescue 116 who are still missing, winchman Ciarán Smith and winch operator Paul Ormsby, were remembered today along with Captain Dara Fitzpatrick, whose funeral took place almost two weeks ago.