The Air Accident Investigation Unit has said the recovered wreckage of the missing Irish Coast Guard Helicopter Rescue 116 is primarily from the tail area of the helicopter.

In a statement, the AAIU said that a significant amount of wreckage has been recovered from the sea and there are marks "on some of the recovered wreckage which are consistent with the tail of the aircraft contacting rocky surfaces on the western end of Blackrock".

It also said that the wreckage will be brought to the AAIU wreckage facility in Gormanston, Co Meath for a "detailed examination".

"This wreckage is primarily from the tail area of the helicopter. At this early stage in the investigation it is not possible to be definitive about the exact nature of damage to the recovered wreckage or indeed the circumstances of the accident.

"However, there appears to be marks on some of the recovered wreckage which are consistent with the tail of the aircraft contacting rocky surfaces on the Western end of Blackrock. The Investigation has not yet definitively identified the initial point of impact."

Earlier, Taoiseach Enda Kenny paid tribute to those involved in the search for the three crew members missing from the helicopter and said the four families of those who were lost in the crash need answers.

The three other crew on board, Chief Pilot Mark Duffy and winchmen Paul Ormsby and Ciarán Smith, are still missing. 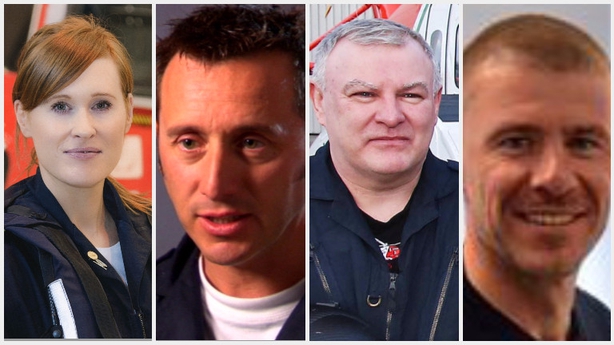 Speaking to reporters at Blacksod Lighthouse today, Mr Kenny commended the "absolute co-operation" between the different agencies involved in the rescue operation.

He highlighted the support of local fishermen, which he said had been central to the search effort.

Mr Kenny said they had provided invaluable expertise and information about the challenging conditions around Blackrock. 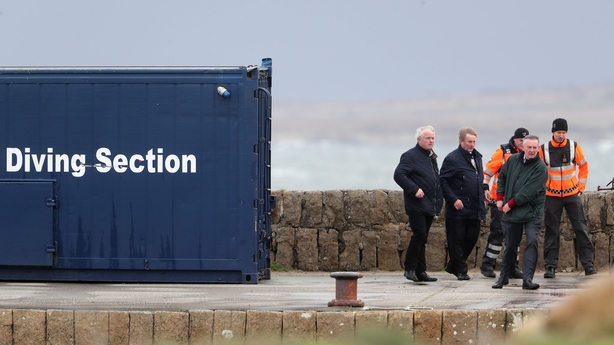 The Taoiseach was speaking after he returned from the LÉ Eithne, where he was briefed about all aspects of the search operation off the Mayo coast.

He said the weather was not conducive to sending down divers to the main search area and it could be Thursday at the earliest before crews would have an opportunity to conduct a detailed underwater search.

He said he could not praise highly enough the local community for the support they were providing to all those involved in the search.

Mr Kenny said answers were needed as to what had happened to the aircraft.

He said this was vital for the families who lost relatives in the crash and also in terms of the Coast Guard service and the facilities it provides.

He said he felt it was important for him to travel to Blacksod today and he hoped by the weekend that more information would be available in respect of the search and the associated investigations into last week's crash.

Micheal O'Toole of the Irish Coastguard said that weather conditions at present were quite poor but the meteorological situation is being continually assessed.

Speaking to RTÉ’s Six One, Mr O’Toole said that conditions tomorrow morning may not favourable but there may be a weather window in the afternoon and on Wednesday.

Taoiseach meeting Coast Guard volunteers involved in the search for R116 and its crew at Halla Naomh Brendán in Aughleam near Blacksod pic.twitter.com/F1KhjKda2Y 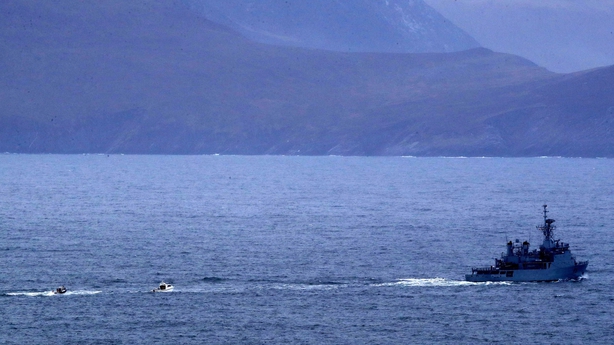 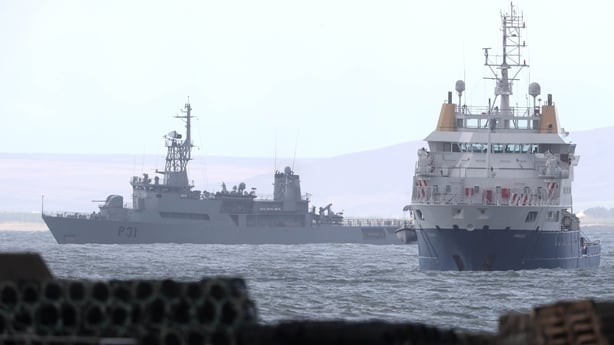 Meanwhile, agencies involved in the search reviewed the next stage of the operation.

The meeting at Blacksod Lighthouse follows an extensive mapping exercise around the crash site yesterday.

Improved conditions at sea meant search crews were able to access Blackrock, around ten nautical miles off the Mayo coast, for the first time since the middle of last week.

This is the area at the centre of the multi-agency effort to locate the missing crew.

They surveyed depth and access points as well as mapping obstacles to ensure that divers will have a considerable insight into the local geography when they begin their operations.

However, the Captain of the LÉ Eithne and the on-scene search co-ordinator said he does not believe divers would be able to go underwater today because of poor weather conditions.

He said "safety is paramount" and they "will only proceed if the weather allows" and are hopeful that the weather will allow it tomorrow.

He said gales were forecast for times today but the weather is due to abate tomorrow.

Commander Fitzgerald said the crew will not rest until they find the missing crew men.

After the local boats returned to port last evening, the Commissioners of Irish Lights' ship ILV Granuaile carried out a reconnaissance at Blackrock.

Subject to conditions, it will dock off the island later today and will be used as a platform for dives by Naval service personnel and Garda divers.

The vessel is also carrying the Marine Institute's Remotely Operated Vehicle, which can be deployed to access difficult to reach areas. It can operate at depths of up to 3km and features a suite of cameras and grabbers, which will be operated from the deck of the Granuaile.

Commander Fitzgerald said said the Granuaile has dynamic positioning, which the LÉ Eithne does not have, meaning "she can bring that platform closer and closer to this very large and treacherous rock, where diving operations are supposed to take place".