A father and son have been injured after a helicopter crashed in Carlingford, Co Louth, this afternoon.

The heilcopter crashed in the front garden of a house as the pilot was approaching a landing area in the house opposite.

It came down in a grove of trees on the edge of a narrow road running between the two houses in the Cooley Mountains, about a kilometer south of Carlingford.

The older man has been flown by Coastguard helicopter to Beaumont Hospital in Dublin. He is in a serious condition.

The younger man was taken to Our Lady of Lourdes Hospital in Drogheda.

Emergency services including the local fire brigade, Doonore Coastguard Unit and ambulance personnel attended the crash near the near the vicinity of the men's home.

It is understood that fire crews had to use cutting equipment to release the men from the helicopter.

Three inspectors from the Air Accident Investigation Unit arrived at the scene just before 9pm to conduct an initial examination.

The examination will resume tomorrow when it is likely the helicopter will be taken to the air accident investigators facility in Gormanstown, Co Meath, for further examination. 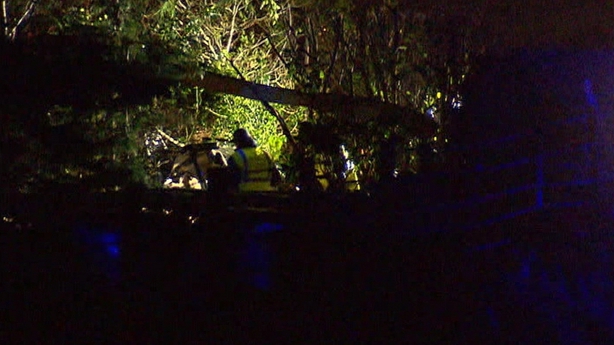