Northern Ireland Secretary of State James Brokenshire has cancelled his trip to Washington to concentrate on critical talks to save power-sharing at Stormont.

Mr Brokenshire was due to meet US President Donald Trump as part of the annual St Patrick's Day visit.

However he has decided to pull out of the trip to focus on helping Northern Ireland's political parties strike a deal.

If no agreement is reached by 27 March the region is facing another snap election.

A senior UK government source said that Mr Brokenshire had been due to fly to Washington on Wednesday for two days.

However, he has decided that the ongoing talks at Stormont are at a "critical stage" and that is where his focus must be.

"He is just focused on getting the right result and getting an agreement by the 27th. The deadline is looming. He will have no other option by law but to call another election if there is no agreement by then," the source said.

Mr Brokenshire recently met the acting US ambassador to the UK, Lew Lukens, to discuss the situation at Stormont.

"The Secretary of State is encouraged by how seriously the Americans are taking this. He would love to go to Washington. Washington has always helped Northern Ireland. But now is not the right time and time is short," the source added.

Political parties are due to resume talks again tomorrow. 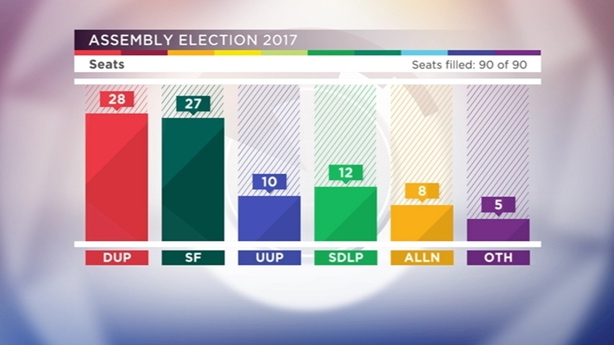 The recent Assembly election saw an end to the unionist majority at Stormont.

Sinn Féin now holds one seat fewer in the assembly than the Democratic Unionist Party.

Last week in a letter to all MPs, Mr Brokenshire set out the consequences of the DUP and Sinn Féin failing to strike a deal.

"If no agreement is reached in the short window following the election, there would be a number of significant consequences.

"There would be no Executive, no real budget, no Programme for Government and risks to public services. Ultimately we would also be facing a second election with ongoing disruption and uncertainty for businesses and the people of Northern Ireland that would bring," he said in his letter.

However Mr Brokenshire added that he was "not contemplating any other outcome but a resumption of devolved government as soon as possible".