US President Donald Trump has said he was open to immigration reform, shifting from his harsh rhetoric on illegal immigration in a speech to Congress that offered a more restrained tone than his election campaign and first month in the White House.

Mr Trump, in a prime-time address to a country that remains divided over his leadership, emphasised his desire to focus on problems at home by boosting the US economy with tax reform, a $1 trillion infrastructure effort and an overhaul of President Barack Obama's signature healthcare law, known as Obamacare.

In his first speech to a Joint Session of Congress, US President Donald Trump called for an overhaul of Obamacare https://t.co/KBBhVbZKQn pic.twitter.com/idAq7qKm7P

After a first month in office dominated by a fight over his temporary travel ban on people from seven Muslim-majority nations, Mr Trump looked for a reset to move past a chaotic period that sowed doubts about his ability to govern effectively.

He called for national unity and showed a more measured tone, avoiding a repeat of his attacks on Democratic opponents and media organisations.

Democratic Senator Tom Carper said that "the person who wrote this speech must not have written the inaugural address. That one was 'dark' and this one was more uplifting."

At his 20 January inauguration, Mr Trump painted a bleak picture of the country and described it as beset with "American carnage."

US stock futures advanced at the start of Mr Trump's address, but gave back some gains later in the speech. 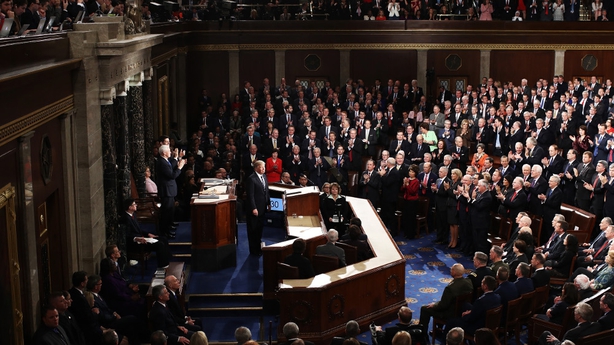 Call for harmony and stability in foreign affairs

He focused part of the speech on foreign policy, stressing his support for NATO but insisting allies pay more for their defence.

In a possible nod to his bid to warm relations with Russia, Mr Trump said: "America is willing to find new friends, and to forge new partnerships, where shared interests align."

We want harmony and stability, not war and conflict.

Mr Trump, said however, he would embark on a big defence build-up.

He said a broad immigration reform plan was possible if both Republicans and Democrats in Congress were willing to compromise. He said U

US immigration should be based on a merit-based system, rather than relying on lower-skilled immigrants.

Comprehensive immigration reform eluded his two predecessors because of deep divisions within Congress and among Americans over the issue. 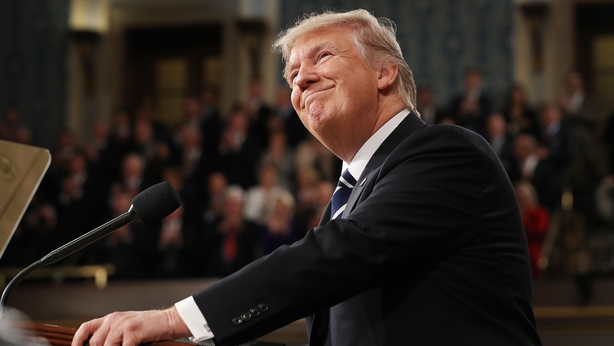 "I believe that real and positive immigration reform is possible, as long as we focus on the following goals: to improve jobs and wages for Americans, to strengthen our nation's security, and to restore respect for our laws," said the Republican president, who took a hard line against illegal immigrants in his 2016 campaign.

Mr Trump has used his early weeks in office to repeat vows to build a wall along the US-Mexico border and intensify deportations of illegal immigrants who have committed crimes.

At the same time, he has expressed sympathy for children who entered the country when their parents crossed the border without proper authority, the "dreamers" who so far are protected by an ordered signed by Mr Obama.

He said he wanted to provide "massive tax relief" to the middle class and cut corporate tax rates.

But he did not offer specifics and failed to comment on the most pressing tax issue facing Congress, a proposed border adjustment tax to boost exports over imports.

Politicians have been looking to Mr Trump for more leadership on an issue that has divided corporate America and Republicans in Congress.

Mr Trump called on the Republican-led Congress to repeal and replace Obamacare with reforms that expand choice, increase access and lower costs. 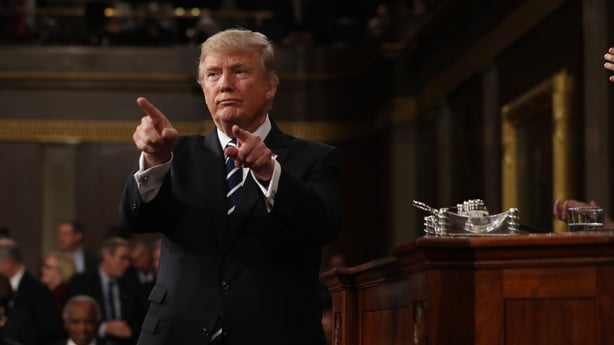 Republicans remain divided on how to accomplish that goal and Democrats are ardently opposed to tampering with a system that provides health insurance for millions of low-income Americans.

Mr Trump's comments lacked detail, but it was the first time he publicly supported tax credits, a nod to health insurers who say they are necessary to keep people in the market.

Former Kentucky Governor Steve Beshear said in the Democratic response to Mr Trump's speech that "you and your Republican allies in Congress seem determined to rip affordable health insurance away from millions of Americans who most need it."

In the most emotional moment of the night, Mr Trump singled out Carryn Owens, the widow of US Navy SEAL William "Ryan" Owens, who was killed in a raid on al-Qaeda in Yemen.

Ms Owens, tears streaming down her face, clasped her hands and looked upward from her spot in the balcony as politicians and the president applauded her in the longest ovation of Mr Trump's hour-long speech. 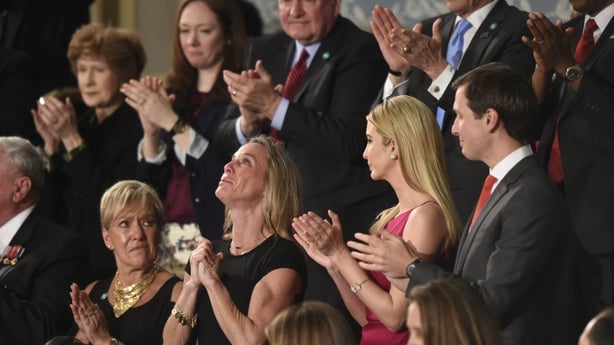 Mr Trump said the mission that her husband participated in obtained vital intelligence that could be used against Islamic militants, taking issue with news reports quoting US officials who said little was gained from the raid.

Chief Petty Officer Owens' father, Bill, in a newspaper interview at the weekend, has called for an investigation into his son's death.