An influential French centrist politician has dropped out of the presidency race to form an alliance with independent candidate Emmanuel Macron, a potential game-changer in France's tightly contested election.

The announcement by Francois Bayrou, 65, a former education minister who has run for president three times and polled 9% of the vote when he stood in 2012, could tip the odds in favour of Mr Macron getting into a run-off against far-right leader Marine Le Pen.

"We are in an extremely risky situation, and to tackle this exceptional situation, I think we need an exceptional response," said Mr Bayrou, referring to a political campaign that has been marked by scandals and upsets in which several big names have disappeared.

"I have decided to offer Emmanuel Macron an alliance. The danger is too big we must change things," he told a news conference, describing his decision as a "sacrifice".

In a statement to Reuters, Mr Macron said he accepted the alliance, which he labelled as a "turning point in the campaign".

Mr Macron, a 39-year-old ex-banker and comparative political novice who has never held elected office, says he seeks to transcend the classic left-right divide in French politics and is drawing huge crowds to rallies that easily equal those of his closest rivals.

The election is held in two stages on 23 April with a run-off vote between the top two candidates on 7 May.

Opinion polls put Mr Macron neck-and-neck with conservative Francois Fillon, a former prime minister, to get into the run-off against Ms Le Pen, head of the anti-immigrant and anti-European Union National Front. 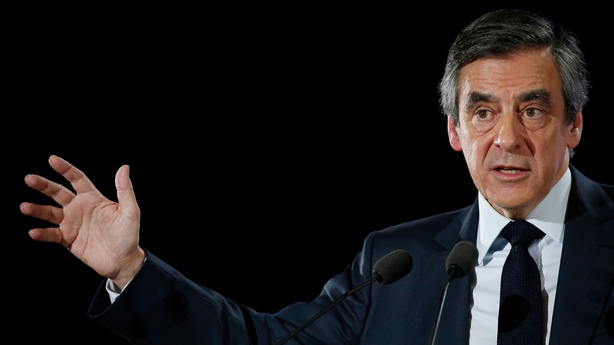 Mr Fillon, 62, was once the frontrunner to win election but his campaign has been hit hard by a scandal over salaries paid to his wife and children out of public funds for work they may not have carried out.

He says they did carry out the work for which they were paid.

Surveys say either Mr Macron or Mr Fillon would then go on to to beat Ms Le Pen in the knockout run-off.

Mr Bayrou's announcement of support for Mr Macron pushed the euro up against the dollar and French bond yields, which had risen because of fears of rising support for Ms Le Pen, fell about five basis points.

Ms Le Pen's chief of staff, meanwhile, has been placed under formal investigation after a day of questioning over the alleged misuse of EU funds to pay parliamentary assistants.

Wary that her image and lead position in opinion polls might equally be hurt, Ms Le Pen said she was convinced voters would not fall for moves designed to derail her and her campaign.

Drawing a distinction between the probe against her and the fraud investigation against Mr Fillon, she said: "The French can tell the difference between genuine scandals and political dirty-tricks."

Mr Bayrou himself had little chance of reaching the run-off between the top two contenders, given the 5-6% that pollsters saw him as likely to get in the first round.

Describing French democracy as under threat, he said that the conservatives under Mr Fillon were riddled with scandals and the Socialists, who he backed in 2012, were in disarray, a situation that could pave the way for the far-right.

"What's at stake with this alliance is to restore hope," Mr Bayrou said.

Earlier today, Francois de Rugy, who stood unsuccessfully as an ecology candidate in the primaries of the left that elected Socialist Benoit Hamon as candidate, said he would back Mr Macron for the presidency.

Mr De Rugy won 3.82% of the vote in those January primaries, and has been critical of Mr Hamon's policies.

"I want to take part in the renewal of politics that Emmanuel Macron has launched," he said on France Info radio.