US President Donald Trump has ratcheted up his attacks on the media, describing the press as "the enemy of the American people" in a tweet.

Shortly after landing at his holiday home in Mar-a-Lago, Florida - where he is spending a third consecutive weekend - the president lashed out on Twitter.

The FAKE NEWS media (failing @nytimes, @NBCNews, @ABC, @CBS, @CNN) is not my enemy, it is the enemy of the American People!

Mr Trump had tweeted an earlier post which targeted the New York Times, CNN, NBC "and many more" media - and ended with the exclamation "SICK!"

But he swiftly deleted that missive before reposting the definitive version - adding two more "enemies" to his blacklist.

Many US presidents have criticised the press, but Mr Trump's language has more closely echoed criticism levelled by authoritarian leaders around the world.

The 70-year-old built his campaign on criticising the press as biased.

On Thursday he launched a long diatribe at a grievance-filled news conference, in which he blamed the media for his one-month-old administration's problems.

In four tumultuous weeks, Mr Trump has seen his national security advisor ousted, a cabinet nominee withdraw, a centrepiece immigration policy fail in the courts and a tidal wave of damaging leaks.

Earlier, the White House said there was no plan to utilise the National Guard to round up unauthorised immigrants, after a news report asserted that the proposal had been under consideration by the Trump administration.

White House spokesman Sean Spicer told reporters he could not categorically say the move had never been discussed anywhere in the administration.

The Associated Press reported the proposal to mobilise up to 100,000 National Guard troops was part of a draft memo being circulated at the Department of Homeland Security (DHS).

Mr Spicer (below) sharply criticised the report. "There is no effort at all to ... utilise the National Guard to round up illegal immigrants," he said. "This is 100% not true." 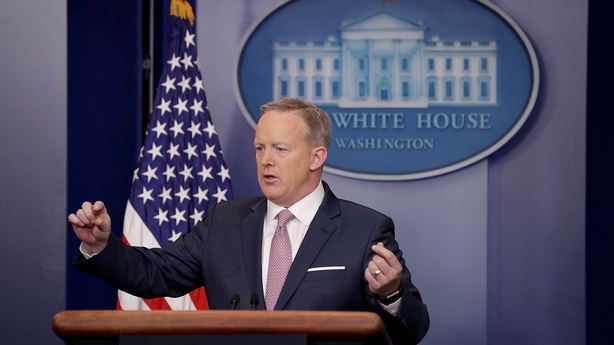 David Lapan, a spokesman for DHS, said the department was "not considering mobilising the National Guard for immigration enforcement".

The AP said the draft memo, dated 25 January, had been circulating among DHS staff for about two weeks and was addressed to the then-acting heads of the US Immigration and Customs Enforcement and US Customs and Border Protection.

The AP said the memo was meant to serve as guidance to implement the wide-ranging executive order on immigration and border security that US President Donald Trump signed on 25 January.

A DHS official, speaking on condition of anonymity, said the memorandum obtained by the Associated Press was an "early, early version" of a document being prepared by staff for Homeland Security Secretary John Kelly.

Discussion of the National Guard was dropped before the memo ever made it to Mr Kelly's desk, the official said.

The memo being prepared for Mr Kelly has not yet been finalised but is expected to be finished soon, the official said.