Speaking to reporters after the meeting, Mr Kenny said Ireland's unique concerns ahead of the Brexit negotiations were increasingly being recognised in Europe.

"We have a particular set of circumstances in Ireland. We are the only place in the EU where there is a peace process, supported by both the European Union and the United States, and this gives us special status as it is. There are peace funds and interreg funds and all of that

"The Republic of Ireland and Northern Ireland are both the places most adversely affected by Brexit, and we need to be imaginative and creative as to how we deal with the situation.

"It does give us a special situation, which is increasingly recognised in Europe."

However an amendment to this effect was blocked by MPs in the House of Commons during last night's Article 50 vote. 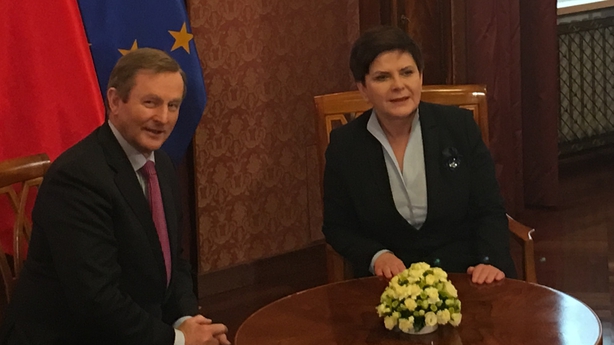 "The position of Poland is identical [to Ireland's] with regard to the protection of acquired rights," she said.

"There are over one million Polish people in the UK.

"For sure it is of big importance for the Polish government that the acquired rights they enjoy are preserved."

Asked if Ireland should be regarded as a special case, Ms Szwydło said: "We are only at the start of the process of Great Britain leaving the European Union. There are a lot of questions being raised. There are many questions that will have to be answered in the very conduct of the process.

"Without any doubt Poland is clear that the agreement which will be worked out in the course of discussions must be based on the principle of being reciprocal.

"It cannot be an agreement which is going to introduce restrictions on trade for example. This is one place where we have a common position with Ireland."

Ms Szydło said that EU leaders had to draw conclusions from the Brexit vote, and that discussions over the future of the EU should see greater power given to national parliaments and capitals.

"We have agreed that the British decision on Brexit is a clear signal of the need to bring in reforms. The European Union has to better respond to the needs of its citizens and it has to react more efficiently to the challenges they are facing.

"Our position is that the voices of nation states and parliaments should be better reflected in the decision-making process in Europe."

However, Mr Kenny said he did not seek "immediate" treaty change and would prefer the EU to complete its existing agenda on the single market, and the digital single market instead.

Minister for Foreign Affairs Charlie Flanagan held a "positive and constructive" meeting with the EU's chief Brexit negotiator Michel Barnier with the border issue high on the agenda.

"We are anxious to maintain that invisibility of the border," Mr Flanagan told reporters.

He said that Ireland faces a "challenge of monumental proportions" in navigating the withdrawal of its main trading partner from the bloc, but remains firmly on the side of the EU in the negotiations.