The Catholic Church has welcomed new plans to address the lack of diversity in the primary education system.

Announcing his intentions, Minister for Education Richard Bruton said everyone agreed that the current process was too slow and that his department had looked and learned from the experience.

Like the old plan, the new one envisages the transfer of religious-run schools to new multi or non-denominational patrons.

However, under the new scheme the school properties will be leased by the State from their current owners, which in the vast majority of cases will be the Catholic Church.

The old plan had aimed to be cost neutral, however in practice it did entail entering into lease arrangements with the Catholic Church. The minister acknowledged that his new plan would involve a cost to the State.

A second key difference is that the country's Education and Training Boards have been charged with leading the new process at a local level.

They have been asked to survey the parents of preschool children to measure demand for multi-denominational schools and to consult with existing school owners such as the Catholic Church about the possible transfer of schools to a new model.

The minister has indicated that his preferred model for transfer is that run by the country's ETBs.

The typical divisions are: Catholics in one group, other Christians in a second, Muslim children in a third, with a fourth group for children of other religions or none. This system enables Catholic children to be prepared for Catholic sacraments such as Communion during the school day.

When this new kind of school was being designed, the Catholic bishops told Department of Education officials that the preparation of Catholic children for the sacraments within school was "a minimum non-negotiable requirement" for their support for any new model.

Documents released to RTÉ under Freedom of Information a number of years ago show that the Catholic Church played a strong role in the design of the Community National School model.

The Catholic Bishop's Conference has today welcomed the minister's statement "in relation to the teaching of religion with sacramental preparation in Community Schools".

The bishops said they would study the proposals and continue to engage with the minister, his officials, and the Education and Training Boards.

Groups campaigning for a more diverse primary school system have given qualified welcomes to the Minister's announcement.

Education Equality, which represents parents seeking change, has said it is encouraged that the minister plans to breathe new life into the divestment process.

However, it says it is concerned by the minister's preference for the Community National School model.

The groups says it believes Community National Schools are not truly equality-based because of the way they segregate children.

A second NGO campaigning for change has welcomed the minister's announcement.

However, EQUATE says clarity is needed on how the "completely fair and independent" transfer of schools is to be achieved.

Minister rejects criticisms of plan by Educate Together

The minister said he did not agree with criticisms of the plan expressed by multi-denominational patron body Educate Together.

Educate Together has criticised the fact that, as the largest provider of multi-denominational education, it was not asked to have any input into the formulation of the new policy.

It said it was concerned that the process would be run by the ETBs who would themselves be candidates for running any newly transferred schools.

Educate Together said there appeared to be no robust process whereby the wishes of parents to define the choice of school would be taken into account.

However, Mr Bruton said this morning that it was natural that the State would choose to use its own local statutory authorities to run such a process. 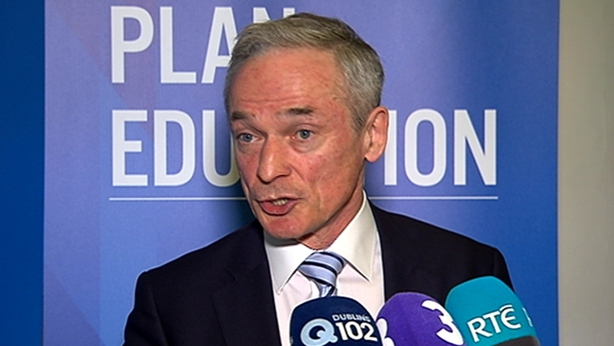 Mr Bruton said that, unlike the previous process, the new scheme did not envisage schools amalgamating or closing before a new kind of school was opened using the same premises.

He said his model envisaged the "live" transfer of existing schools, complete with existing boards of management.

Mr Bruton said the transfer of any schools would be voluntary.

The country's Education and Training Boards have also welcomed the minister's plan.

In a statement, the ETBs said that as patrons of many multi-denominational schools at second level, as well as 11 Community National Schools at primary level, they were "very aware of the changing societal demands".

They said that the challenging reality of different patronage demands from different cohorts of parents must be addressed "sensibly and rationally".

The CEO of ETB Ireland, Michael Moriarty, said that in the main any school to be divested would be under the patronage of the local Catholic bishop.

Mr Moriarty said he hoped that where demand for multi-denominational education was proven, the ETB and the diocese could engage constructively.