Irish Farmers' Association President Joe Healy has said he does not think Ireland will find a trading partner as lucrative as the UK.

Speaking on RTÉ's Morning Ireland, he outlined the many challenges Brexit poses for Ireland's farming community.

"The UK is an important trading partner for us. 40% of agri-food products go to the UK. That's worth about €5 billion alone. We export 90% of our beef, with half of that going to the UK.

"Our dairy products that are exported to the UK have a value of slightly less than €1 billion."

He said it is "almost impossible" to find markets where farmers would get the same returns that they currently get from the UK market.

He said Minister for Agriculture Michael Creed is trying to secure a deal, but added "we are clutching at straws. The fact is that the UK is our closest trading nation and transporting our produce to mainland Europe could be more expensive."

"Every time someone has opened their mouth and there has been a response from Brussels there is movement in the currency rate."

He said the IFA is looking for several things from EU Agriculture Commissioner Phil Hogan.

"We are looking for more certainty to slow down the movement of sterling going up and down. And the provision for strong cap as we go forward."

Lagarde says Brexit will not be 'without pain' 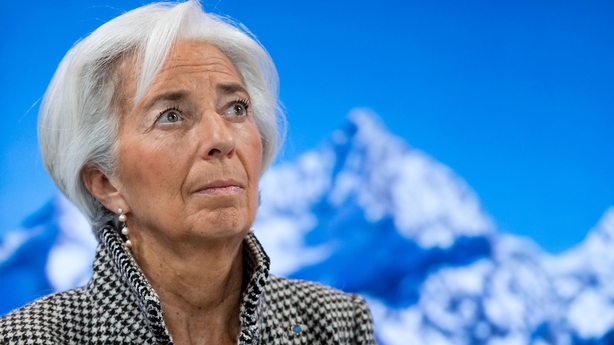 Meanwhile, International Monetary Fund chief Christine Lagarde warned last night that separation from the European Union will not be "without pain", despite the resilience shown by the British economy since the referendum vote.

Ms Lagarde said any Brexit trade deal the UK strikes with the EU was unlikely to be as good as the current arrangements enjoyed as part of the single market.

A series of issues remained to be resolved about the UK's future trading relationship with the EU and other countries and "uncertainty is always a risk".

In its latest World Economic Outlook, the IMF said it now expects the UK economy to grow by 1.5% this year, marking a 0.4% upward revision to forecasts made in October.

The "extraordinary" response by the Bank of England and the "quite remarkable" behaviour by British consumers who have continued to spend had helped the economy defy the gloomy forecasts - including by the IMF.

But at the World Economic Forum in Davos, Ms Lagarde told the BBC: "Once uncertainty clears, if people feel that their ability to set up shop in the UK and operate throughout the geographical area that is the European Union is not working as well as it did, the investment decision will change.

"In the same vein, if exports are subject to significant tariffs, restrictions and so on and so forth, the ability of the UK to activate that trade engine is going to be reduced.

"So while we have upgraded our forecasts for 2017, we have downgraded for 2018 ... We are still of the view that it will not be positive all along and without pain."

Ms Lagarde echoed the views of Maltese Prime Minister Joseph Muscat, who said that any Brexit deal the UK strikes with Brussels must be "inferior" to EU membership.

She said the members of a club "have a degree of affinity and particular terms under which they operate" and "somebody outside the club ... has different access".

The future relationship the UK agrees "would certainly be different, and if being part of a club is optimising and leveraging your membership it would not be as good".