Once an IRA leader, Martin McGuinness left his past behind to become one of the major players in Northern Ireland's peace process.

His unlikely journey took him from being second-in-command of the Provisionals in Derry on Bloody Sunday to Deputy First Minister at Stormont.

During his time as Deputy First Minister he forged such a good working relationship with former Democratic Unionist Party leader Ian Paisley that they were dubbed "the Chuckle Brothers".

But it was his more strained relationships with Mr Paisley's successors, Peter Robinson and Arlene Foster, that led to continual difficulties in recent years at the top of the power-sharing executive.

In recent months he has been plagued by ill health, recently being forced to withdraw from a business trip to China with First Minister Ms Foster on medical advice.

Announcing his resignation at Stormont in Belfast, Mr McGuinness appeared tired and gaunt.

In June 2008 he was reappointed as Deputy First Minister to serve alongside Peter Robinson, who succeeded Mr Paisley as First Minister.

Mr McGuinness has always acknowledged his IRA past. 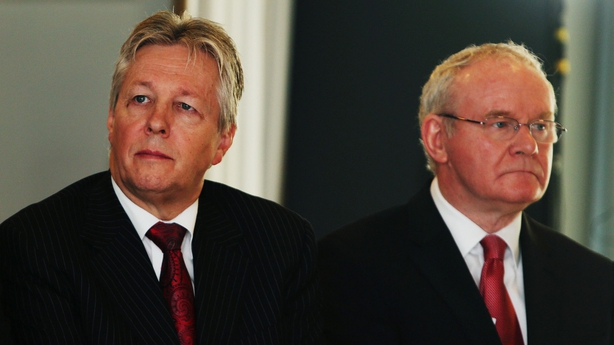 In 1972, at the age of 21, he was second-in-command of the IRA in Derry, a position he held at the time of Bloody Sunday, when 14 civil rights protesters were killed in the city by soldiers with the 1st Battalion, Parachute Regiment

The following year he was convicted by the Special Criminal Court after being arrested near a car containing explosives and ammunition.

After his release, and another conviction in the Republic for IRA membership, he became increasingly prominent in Sinn Féin, eventually becoming its best known face after Gerry Adams.

In 1982 he was elected to the Northern Ireland Assembly at Stormont representing his home city of Derry. He was the second candidate elected after John Hume.

But as with all elected members of Sinn Féin and the SDLP, he did not take his seat.

He was elected to the Northern Ireland Forum in 1996 representing Foyle. Having contested Foyle unsuccessfully at the 1983, 1987 and 1992 Westminster elections, he became MP for Mid Ulster in 1997.

After the Good Friday Agreement was concluded, he was returned as a member of the Assembly for the same constituency, and nominated by his party for a ministerial position in the power-sharing executive, where he became minister of education.

During his time as minister he scrapped the 11-plus exam, which he had failed as a schoolboy.

The Good Friday Agreement proved difficult to implement and was amended by the St Andrew's Agreement in 2006. 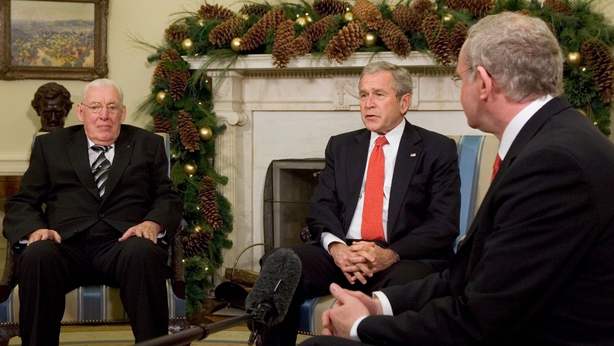 By now the DUP and Sinn Féin, once staunch enemies, were the two largest parties in Northern Ireland. Mr McGuinness and Mr Paisley emerged as Northern Ireland's new political leaders.

In December 2007, while visiting US president George W Bush at the White House with Mr Paisley, Mr McGuinness said to the press:

"Up until the 26th of March this year, Ian Paisley and I never had a conversation about anything - not even about the weather - and now we have worked very closely together over the last seven months and there's been no angry words between us. This shows we are set for a new course."

However, after Mr Paisley's retirement, relations soured between the two main parties of the power-sharing executive, finally leading to the crisis of the RHI scandal and Mr McGuinness's resignation.