US President-elect Donald Trump praised Russian President Vladimir Putin for not quickly hitting back at Washington for the punitive measures imposed over alleged interference in the November election.

Earlier, the Russian leader ruled out any immediate tit-for-tat expulsions of American officials in the row over what Washington says were "efforts to harm US interests" in connection with the 8 November election won by the Republican.

Mr Putin's own foreign ministry had recommended that he eject 35 American officials to counter-balance US President Barack Obama's move yesterday to expel 35 Russian intelligence operatives and shut down two Russian compounds in the US.

Great move on delay (by V. Putin) - I always knew he was very smart!

"We will not expel anyone," Mr Putin said in a statement, adding that Russia reserved the right to retaliate.

"Further steps towards the restoration of Russian-American relations will be built on the basis of the policy which the administration of President D. Trump will carry out," he said.

Mr Trump, who will succeed Mr Obama on 20 January, has repeatedly praised Mr Putin and made a number of cabinet picks of people with ties to Russia.

The FBI and CIA have concluded that Russian intelligence agencies oversaw the hacking and leaking of emails from Democratic Party organisations under Kremlin orders this year in order to benefit Mr Trump's campaign against Hillary Clinton.

In the past, the president-elect has ridiculed US intelligence about Russia's cyber-meddling, saying it was not clear who conducted the attacks.

He has long treated such accusations as a thinly veiled effort by a Democratic president to delegitimise a Republican victory. 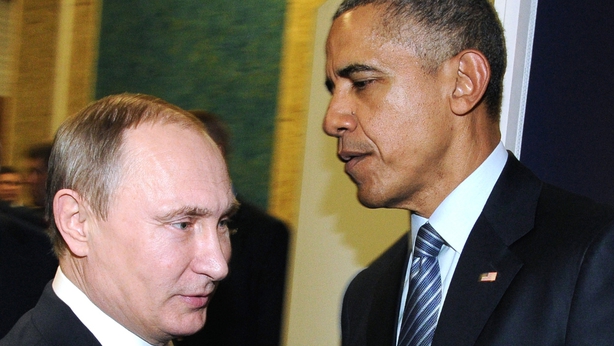 On Wednesday, he issued a call for the country to "move on to bigger and better things," but said he would meet with US intelligence leaders next week to be "updated on the facts of this situation".

While Mr Trump has already received intelligence briefings about the alleged hacking and substantial evidence is in the public sphere, his pledge to meet with intelligence chiefs could provide a face-saving opportunity to further soften his stance.

Russian officials have portrayed the sanctions as a last act of a lame-duck president and suggested Mr Trump could reverse them when he takes over from Mr Obama, a Democrat.

However, should Mr Trump seek to heal the rift with Russia, he might encounter opposition in Congress, including from fellow Republicans.

Republican John McCain, chairman of the Senate Armed Services Committee, has scheduled a hearing for next Thursday on foreign cyber threats. Other senior Republicans, as well as Democrats, have urged a tough response to Moscow.

A total of 96 Russians are expected to leave the United States including expelled diplomats and their families.