A nationwide ceasefire which was brokered by Russia and Turkey has come into effect in Syria.

Mr Putin added that the parties were also prepared to start peace talks after Russia, Iran and Turkey expressed readiness to broker a deal to settle the nearly six-year-old Syrian war.

The Syrian army announced a nationwide halt to fighting but said Islamic State and ex-Nusra Front militants and all groups linked to them would be excluded from the deal.

It did not say which unnamed groups would be excluded.

Several rebel officials told Reuters they had agreed to the ceasefire. It is the third nationwide ceasefire agreed in Syria this year.

The previous two, negotiated by the United States and Russia, collapsed within weeks as warring sides accused each other of violations.

The current deal does not involve the US or United Nations.

However the UN's Syria envoy Staffan de Mistura has welcomed the announcement, saying he hoped it would save civilian lives, enable the delivery of aid and lead to productive peace talks in Astana next month.

"These developments should (also) contribute to inclusive and productive intra-Syrian negotiations to be convened under UN auspices on 8 February 2017," Mr de Mistura's spokeswoman said in a statement.

Turkish President Recep Erdogan has said the planned ceasefire was a "historic opportunity" to end the nearly six year Syrian conflict, saying it was a chance that could not be wasted.

One rebel commander expressed optimism that this deal would hold: "This time I have confidence in its seriousness. There is new international input," he said, without elaborating.

Talks on the latest truce picked up momentum after the three regional power said last week that they were ready to back a peace deal and adopted a declaration setting out principles that any agreement should adhere to.

Mr Putin said opposition groups and the Syrian government had signed a number of documents, including the ceasefire, measures to monitor the truce, and a statement on readiness to start peace talks.

"The agreements reached are, of course, fragile, need a special attention and involvement... But after all, this is a notable result of our joint work, efforts by the defence and foreign ministries, our partners in the regions," Mr Putin said. 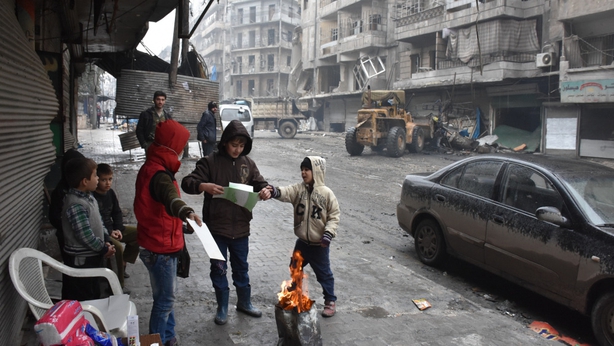 He also said Russia had agreed to reduce its military deployment in Syria, where its support has turned the tide in favour of President Bashar al-Assad in a war that has killed more than 300,000 and forced more than 11 million to flee their homes.

Turkey said it and Russia would guarantee the ceasefire.

"With this agreement, parties have agreed to cease all armed attacks, including aerial, and have promised not to expand the areas they control against each other," the Turkish foreign ministry said.

Russia's defence ministry said the insurgent groups that signed the agreement included the powerful Islamist Ahrar al-Sham, Jaish al-Islam, which operates primarily near Damascus, and Jabha Shamiya, one of the main groups that has operated in Aleppo.

The US has been sidelined in recent negotiations and is not due to attend the next round of peace talks in Astana, capital of Kazakhstan, a key Russian ally.

Its exclusion reflects growing frustration from both Turkey and Russia over US policy on Syria, officials have said.

However, Russian Foreign Minister Sergei Lavrov said the US could join the peace process once President-elect Donald Trump takes office next month.