Thousands of people have been evacuated from the last rebel-held enclave of Aleppo in return for insurgents allowing people to leave two besieged pro-government villages in nearby Idlib province.

In bitter winter weather, convoys of buses from eastern Aleppo reached rebel-held areas to the west of the city, and more buses left the Shia Muslim villages of al-Foua and Kefraya for government lines, according to a UN official and the Syrian Observatory for Human Rights, a monitoring group.

The talks, aimed at giving fresh impetus for a solution in Aleppo, will go ahead despite Russia's ambassador to Turkey being murdered in Ankara this evening.

The United Nations Security Council agreed a resolution calling for UN officials and others to be allowed to monitor evacuations from east Aleppo and the safety of civilians still there.

The Syrian ambassador to the United Nations, Bashar Ja'afari, denounced the resolution as propaganda, saying the last of the rebels were leaving and Aleppo would be "clean" by this evening.

The recapture of Aleppo is Syrian President Bashar al-Assad's biggest victory so far in the nearly six-year-old war, but the fighting is not over with large parts of the country still controlled by insurgent and Islamist groups.

Turkish Foreign Minister Mevlut Cavusoglu said 20,000 civilians had been evacuated from Aleppo so far, but there were wide variations in estimates of how many people still sought to be taken out, from a few thousand up to tens of thousands.

"The process is supposed to continue" throughout the night barring any unforeseen obstacles, he said, speaking to Reuters from Turkey.

Nearly 50 children, some critically injured, were rescued from eastern Aleppo, where they had been trapped in an orphanage, the United Nations said.

The evacuation of civilians from the two villages had been demanded by the Syrian army and its allies before they would allow fighters and civilians trapped in Aleppo to depart. The stand-off halted the Aleppo evacuation over the weekend.

"Complex evacuations from East Aleppo and Foua & Kefraya now in full swing. More than 900 buses needed to evacuate all. We must not fail," Jan Egeland, who chairs the United Nations aid task force in Syria, tweeted.

Ahmad al-Dbis, a medical aid worker heading a team evacuating patients from Aleppo, said more than 100 buses had left the city. "Some evacuees told us that a few children died from the long wait and the intense cold while they were waiting to evacuate," he told Reuters. 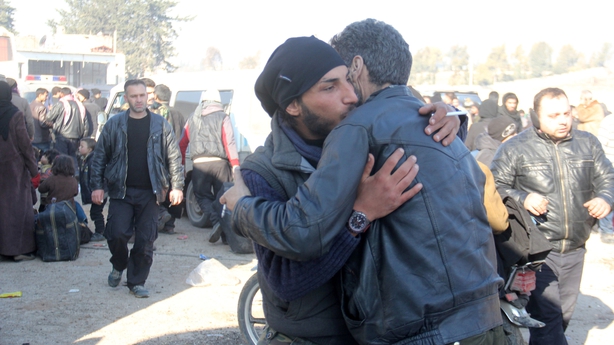 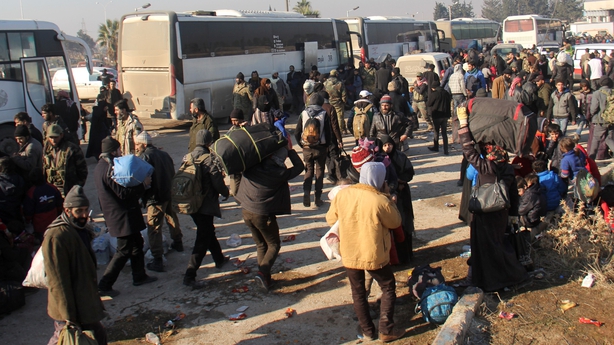 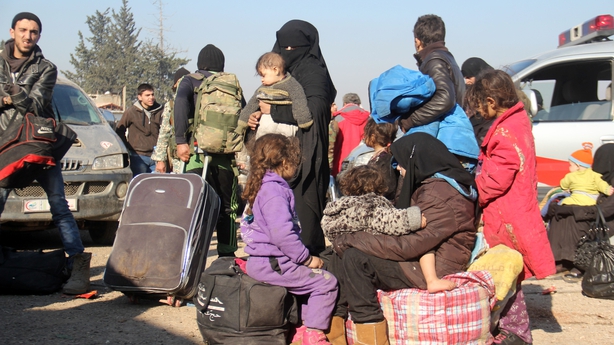 Photographs of people evacuated from Aleppo showed large groups of people standing or crouching with their belongings or loading sacks onto trucks.

Yesterday, some of the buses sent to al-Foua and Kefraya to carry evacuees out were attacked and torched by armed men.

That incident threatened to derail the evacuations, the result of intense negotiations between Russia and Turkey.

The fate of those stuck in the last rebel bastion in Aleppo is still at stake after a series of sudden advances by the Syrian army and allied Shia militias under an intense bombardment that pulverised large sections of the city.

They have been waiting for the chance to leave Aleppo since the ceasefire and evacuation deal was agreed late last Tuesday, but have been prevented from doing so during days of hold-ups.

In the square in Aleppo's Sukari district, organisers gave every family a number to allow them access to buses.

"Everyone is waiting until they are evacuated. They just want to escape," said Salah al Attar, a former teacher with his five children, wife and mother.

Thousands of people were evacuated on Thursday, the first to leave under the ceasefire deal that ends fighting in the city where violence erupted in 2012, a year after the start of conflict in other parts of Syria.

They were taken to rebel-held districts of the countryside west of Aleppo.

Turkey has said Aleppo evacuees could also be housed in a camp to be constructed in Syria near the Turkish border to the north.

Seven-year-old Bana al-Abed, whose Twitter account has offered a tragic account of the war in Syria, was evacuated from Aleppo this morning, a Turkish NGO announced on social media.

"This morning @AlabedBana was also rescued from #Aleppo with her family. We warmly welcomed them," the Humanitarian Relief Foundation (IHH) wrote on its Twitter account, sharing an IHH aid worker's selfie with the girl.

For her tens of thousands of followers, Bana is a symbol of the tragedy unfolding in Syria, although the Syrian regime has slammed her and her mother's nearly daily tweets as propaganda.

Bana's account has posted pictures of the destruction in Aleppo including her rubble-littered street, while people have tweeted messages of support and concern, notably fearing for her life when tweets became less frequent.

This is our house, My beloved dolls died in the bombing of our house. I am very sad but happy to be alive.- Bana pic.twitter.com/9i0xxJrQtD