The United Nations General Assembly has voted by 122 to 13 to demand an immediate cessation of hostilities in Syria, humanitarian aid access throughout the country and an end to all sieges, including in Aleppo.

Thirty-six countries abstained in the vote on the Canadian-drafted resolution on the nearly six-year Syrian conflict.

General Assembly resolutions are non-binding, but can carry political weight.

Earlier the UN voiced concern that hundreds of men may have gone missing after fleeing into government-controlled parts of Aleppo in Syria.

It said armed groups were reportedly blocking civilians from leaving the shrinking areas under their control.

"While it's very difficult to establish the facts in such a fluid and dangerous situation, we have received very worrying allegations that hundreds of men have gone missing after crossing into government-controlled areas," UN rights office spokesman Rupert Colville told reporters in Geneva.

He said the men were between the ages of 30 and 50, and their family members said they had lost contact with them after they fled opposition-controlled areas of Aleppo around a week or ten days ago.

"Given the terrible record of arbitrary detention, torture and enforced disappearances by the Syrian government, we are of course deeply concerned about the fate of these individuals," Mr Colville said.

His comments came as Syrian government artillery bombarded the fast-shrinking rebel enclave in the heart of Aleppo today despite its ally Russia's announcement of a new humanitarian pause, according to the Syrian Observatory for Human Rights.

The army has recaptured 85% of the eastern sector of the city which the rebels had held since summer 2012.

The assault has prompted a mass exodus from east Aleppo where at least 80,000 people have fled their homes, according to the monitor.

Mr Colville warned that "there have been allegations of reprisals against civilians who are perceived to have supported armed opposition groups" as they fled into government-held areas.

It is unclear how many civilians remain in rebel territory, but there was an estimated 250,000 in east Aleppo prior to the latest offensive. 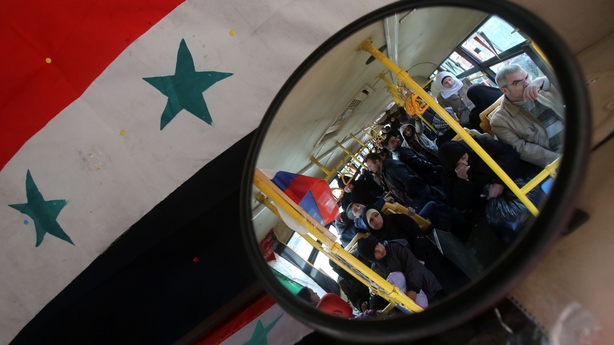 The UN spokesperson said that more than 100,000 people were believed to remain inside the areas controlled by the opposition in east Aleppo, but warned the situation was very fluid and the numbers were unclear.

He said armed Syrian opposition groups were reportedly blocking civilians from leaving their shrinking enclave, and had allegedly abducted and killed people who protested their presence.

"Some of the civilians who are attempting to flee are reportedly being blocked by armed opposition groups," he said.

"During the last two weeks, Fatah al-Sham Front (formerly al-Nusra Front) and the Abu Amara Battalion are alleged to have abducted and killed an unknown number of civilians who requested the armed groups to leave their neighbourhoods, to spare the lives of civilians," he added.

In addition, the groups had reportedly "demanded that activists inform them of civilians attempting to leave, along with the names of those who participated in protests against the presence of Fatah al-Sham Front and groups affiliated with them" in several neighbourhoods a few weeks ago, Mr Colville said.