The Health Information and Quality Authority has said that significant risks still remain to the safety of patients attending the Midland Regional Hospital in Portlaoise and the future of the hospital is uncertain.

After the death of infant babies at the hospital, HIQA set out hundreds of recommendations to restore safe and quality services in a report published last year.

Practices at the maternity unit of the hospital were the subject of an RTÉ Investigation in January 2014.

In an update on the provision of safe and quality services published today, HIQA says that, while some progress has been made and maternity services are being provided in a safer way, the hospital is still understaffed and struggling to recruit non-consultant hospital doctors.

It found 38 midwives working in a maternity unit that should have 52.

The CEO of the Dublin Midlands Hospital Group has said patients who are due to attend the hospital should be reassured that additional funding of €6 million per year is being provided.

Speaking on RTÉ's Six One News, Dr Susan O'Reilly said the HIQA report contained no surprises and was "balanced and fair".

Dr O'Reilly said that challenges remained, but pointed out that hospitals nationally were facing similar challenges.

Earlier, HIQA director of regulation Mary Dunnion blamed the lack of a strategic plan for the emergency department as the main problem and said without it patient safety is "still at risk" and the hospital's future is "uncertain".

Speaking on RTÉ's News At One, she said the hospital does not have a vision or know what its future is.

She said: "The future of Portlaoise must be articulated. The staff, the people who use Portlaoise hospital need to know what the future of the hospital is and thereafter those services must be resourced."

Ms Dunnion said significant work has been done in Portlaoise since HIQA carried out a review in 2014, and an improvement has been made in arrangements to ensure the quality and safety of services, which is to be commended.

However, she added that there still remains uncertainty around provision of services at the hospital which has led to problems with recruitment and morale, which in turn influences the quality of service for patients.

A father, whose baby son died following his birth at the Midland Regional Hospital, has said he is very disappointed with a HIQA report into patient safety at the hospital.

Mark Molloy, who has campaigned with his wife Róisín about services at the hospital since the death of his son Mark in 2012, said it is unacceptable that the HSE is taking this amount of time to make a decision on the future of Portlaoise. 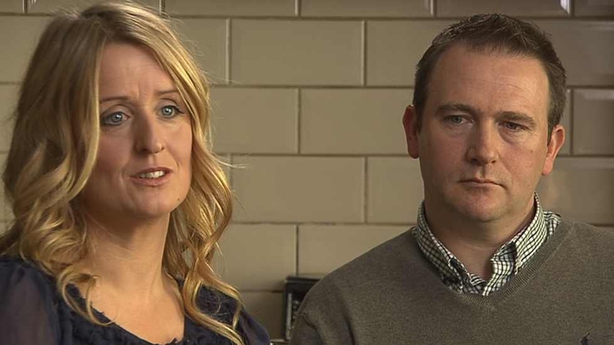 Speaking on RTÉ's Today with Sean O'Rourke, he said that families have gone to great lengths to highlight problems at the hospital over the last ten years, and it is unacceptable that it has gone on for so long.

Mr Molloy added that he knew morale with staff at the hospital was very low and there was a problem attracting staff.

However, he said that the local community paid the same taxes as everyone else and deserved the same service as those in urban areas.

His wife said the review raised the question of whether or not anything had changed at Portlaoise hospital maternity services.

She said that if there was a shortage of midwives then mothers going into the hospital should be informed, but they are not being told of the situation.

She said the central issue still remained that those personally responsible for mistakes which led to the deaths of infant babies have not been held accountable.

In a statement, the Dublin Midlands Hospital Group said it welcomed the publication of the report, which noted progress has been made, saying that it was due to the investment, recruitment and commitment of local clinical and management staff.

It said there has been an 18% increase in staffing levels across maternity, paediatric, medicine and emergency services and recruitment is under way to provide an extra emergency medicine consultant to extend supervisory hours in the emergency department.

The statement added that an Action Plan for hospital services in the midlands has been submitted to the Department of Health for review.

Minister for Foreign Affairs Charlie Flanagan rejected suggestions that the Government is culpable for the concerns over safety at Portlaoise hospital.

The Fine Gael TD said he had called on the HSE to proceed with the investment necessary to recruit additional nursing staff and consultants to provide the services that the people of Co Laois urgently required.

He said Minister for Health Simon Harris would visit the hospital in the next couple of weeks.

Giving her reaction to this morning's HIQA report, Kathleen O'Brien of Portlaoise Hospital Action Committee said she was very disappointed that a decision had not been made to proceed with the investment necessary to make the hospital safe.

She said she expects a public meeting and a protest march to now take place.

Fianna Fáil TD for Laois Seán Fleming said that all the problems in the hospital are a result of a lack of resources made available by the HSE to allow the hospital provide a sustainable service.

"A sustainable hospital can only exist if sufficient sustainable resources are provided by senior HSE management," said Mr Fleming.

"I am laying 100% of the blame for the difficulties in Portlaoise on specific regional and national managers in the HSE.

"I am calling on the Minister for Health to tell the HSE to cancel their agenda against Portlaoise Hospital and to provide it with the sustainable resources that it needs to improve services in the region."