Taoiseach Enda Kenny has said Pope Francis has confirmed he will travel to Ireland in August 2018.

It comes after Mr Kenny held a 23-minute meeting with the pope in the Vatican.

The meeting was requested following the invitation to the pope by the Irish Catholic Bishops' Conference to visit Ireland for their church's World Meeting of Families in two years.

Taoiseach, accompanied by the Head of the Papal Household Georg Gänswein, arrives in St Ambrose Hall, ahead of meeting with  @Pontifex pic.twitter.com/ZZtqjxXQH5

The Taoiseach would not confirm or deny that he had raised the issue of Irish priests who had been silenced to varying degrees by the Vatican over their published views on issues such as the ordination of woman and priestly celibacy.

A reliable clerical source told RTÉ News that Mr Kenny was to raise the cases of six Irish priests who have been silenced by the Catholic Church. The source said the Taoiseach spoke to at least one of the priests concerned before departing for Rome.

When pressed after his meeting with Pope Francis, Mr Kenny said he had "a number of  issues which would in my view help greatly his visit when he comes in 2018.

"That's an area which I think he appreciates."

Under the pontificates of St Pope John Paul II and Benedict XVI, the writings of the priests were ordered to be censored by local church authorities.

The decision was made by the Congregation for the Doctrine of the Faith (CDF).

Another, Fr Tony Flannery, has been removed from ministry because he refused to recant in writing his statements disagreeing with the church's absolute ban on ordaining women priests, with its ban on artificial contraception and with its teaching on homosexuality.

The other four must submit anything they propose to publish to church censors.

In the past, Fr Flannery has said that the crux of the matter is the secretive manner in which the CDF investigates a priest's utterances and writings without allowing him to know the charges against him, so that he can prepare a defence before an edict is handed down from the Vatican.

Speaking on RTÉ's News At One, Fr O'Donovan said he does not expect that following such a brief meeting with the Taoiseach that the priests' treatment was discussed in any great detail.

He said that in his view "asking the pope himself like that would be next to useless" as these matters "are handled by the Congregation for the Doctrine of the Faith and I don't know to what extent the pope is in charge of that, but you get the feeling that they're biding their time".

He said: "We don't know their names or who takes the action against us, or who imposes the sanctions; that's all done in secret," adding "it's not the pope himself directly" and he said he does not think "there wouldn't be any bearing in anything the Taoiseach might bring up with the pope".

Fr O'Donovan said he was very happy to hear that Pope Francis intends to visit and he has "great admiration" for him.

The Taoiseach was accompanied to the Vatican by his wife Fionnuala, Irish Ambassador to the Holy See Emma Madigan, his Chief of Staff Mark Kennelly and other officials.

The meeting took place in the Papal Library in the Apostolic Palace.

The Taoiseach received a framed etching of St Peter's Basilica as it was originally designed. 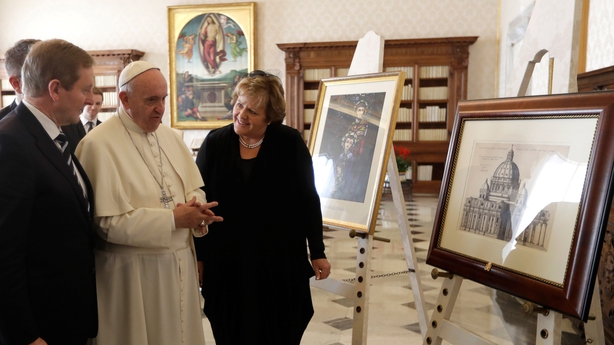 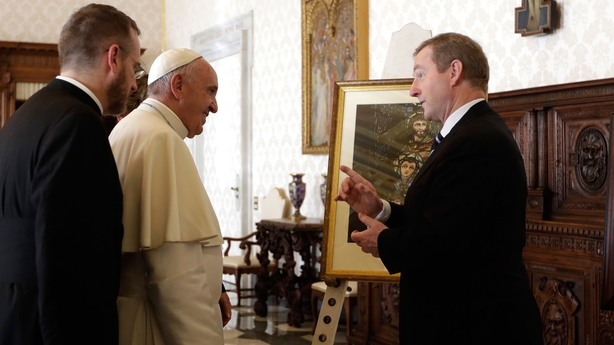 Mr Kenny then held a meeting with the Vatican Secretary of State Cardinal Pietro Parolin.

Much has happened since Mr Kenny's attack on the Vatican in July 2011 in the wake of the Cloyne report on clerical abuse of children.

The Taoiseach's comments were unprecedented in the history of Ireland's relations with the Holy See.

His denunciation in the Dáil of the Vatican's alleged attitude to the legacy of abuse followed by the closure of the Irish embassy to the Holy See marked the lowest point in relations between the Irish State and the papacy.

Since then, relations have much improved. 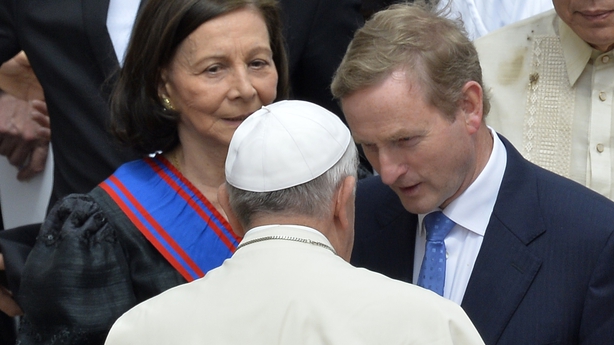 In April 2014, the Taoiseach briefly met Pope Francis during the canonisation of John Paul II and John XXIII, and informally invited him to Ireland.

A short time later, the Government reopened its embassy to the Vatican.

It was reported earlier that the pope did intend to make what would probably be a two-day pastoral visit to Ireland.

Mr Kenny was expected to tell the pontiff that the State would extend every courtesy to facilitate his visit.

The question of whether he would visit Northern Ireland was also likely to come up.

The two men were also expected to discuss the recent developments within the European Union, including the migration crisis, an issue which Pope Francis has often spoken strongly about.

The Catholic Primate of All Ireland has said he hopes the visit by Pope Francis will be characterised by "welcome" and "generosity of spirit".

Speaking on RTÉ's Six One, Archbishop Eamon Martin said the World Meeting of Families is one of the three big international events in the life of the Catholic Church and he hopes there will be many opportunities for people, across Ireland, to participate in the event.

Archbishop of Dublin Diarmuid Martin has said he was "very pleased" to hear of Pope Francis’ intentions.

Mr Ross said he felt there may be "better times to come than in the middle of a controversial political matter in which he might get embroiled."

Sinn Féin deputy leader Mary Lou McDonald, meanwhile, has said she is not concerned about the timing of the visit.

Ms McDonald said she hoped the pope would visit both sides of the border, adding that his visit would be appropriate and welcome.

Regarding the Eighth Amendment, Ms McDonald said it was crucial that the debate was informed and people were provided with information.

She added people have religious beliefs and are entitled to them, but she stated it is also understood that in a republic, the law is the law that caters for everyone.

David Quinn of the Iona Institute, a conservative think-tank, told RTÉ News he would expect Pope Francis to mention abortion in public here.

He also said that, given the Pontiff's popularity with the country's political middle-ground, the visit will probably be a shot in the arm for the current campaign to keep the Eighth Amendment to the Constitution in place.

Meanwhile, Mark Vincent Healy, an advocate for survivors of child sexual abuse by clergy who has met Pope Francis in the Vatican criticised the manner of the Taoiseach's announcement today.

He dismissed Mr Kenny's claim that the Church under Pope Francis has significantly improved its response worldwide to survivors and victims' families, which he estimates are numbered in their hundreds of thousands.

In a statement, Mr Healy accused Pope Francis' Commission for the Protection of Minors for achieving little during its 32 months in existence.

He also said Mr Kenny's description of improvements of church-State relations here following Mr Kenny's excoriation of the Vatican in 21011 over the Cloyne Report beggared belief.

He accused Mr Kenny's Government of not providing enough support to victims and of allowing funds that were to be managed for and on behalf of survivors of residential abuse to be raided under a Memorandum of Understanding signed in October 2014 between the church organisation Towards Healing and the state-established body, Caranua.

He continued: "I noted quite some time ago that the intention of rebranding the Redress Board was disingenuous. Caranua are a wind-up shop with a four year remit to conclude any and all responsibility of the church and state to Residential Institutional Redress Board survivors.

"Instead of investing the €110m in ongoing services from January 2014, it was the objective of Caranua to terminate by August 2018 any further service to alleviate the lifelong suffering to which RIRB survivors are subjected.

"A statutory review of the functions and performance of Caranua was due last January. It has not been delivered this year. The terms of reference of the review was supposed to include survivors in discussion of those terms but this was not the case," Mr Healy said