President Michael D Higgins and world leaders have paid tribute to Fidel Castro, the Cuban revolutionary leader who built a communist state on the doorstep of the United States, but in death just as in life he divided opinion, and critics labelled him a "tyrant".

President Higgins has issued a statement commenting on his "great sadness" at Castro's passing.

Mr Higgins said he "was of a generation of leaders that sought offer an alternative global economic and social order".

Mr Higgins added: "Fidel Castro will be remembered as a giant among global leaders whose view was not only one of freedom for his people but for all of the oppressed and excluded peoples on the planet."

Minister for Foreign Affairs Charlie Flanagan said: "I would like to express my condolences to the people of Cuba at this time.

"While his legacy is a complex one, Fidel Castro was a major figure in twentieth century history and his death marks the end of an era."

"Fidel Castro will be remembered as a giant among global leaders." https://t.co/hX84AajZ5l pic.twitter.com/AXciQ6Qcns

French President Francois Hollande mourned the loss of a major figure on the world stage and welcomed the rapprochement between Havana and Washington, while noting concerns over human rights under the Castro regime.

"Fidel Castro was a towering figure of the 20th century. He incarnated the Cuban revolution, in both its hopes and subsequent disillusionments," Mr Hollande said.

"France, which condemned human rights abuses in Cuba, had equally challenged the US embargo on Cuba, and France was glad to see the two countries re-establish dialogue and open ties between themselves," added the Socialist party leader.

Mr Hollande met Fidel Castro in May, 2015 during the first ever visit by a French head of state to Cuba since the Cuban revolution.

"History will record and judge the enormous impact of this singular figure on the people and world around him," US President Barack Obama said, extending "a hand of friendship" to Cuba.

Obama's elected successor, Donald Trump, said he would work to ensure the Cuban people "can begin their journey toward prosperity and liberty," even though "the tragedies, deaths and pain caused by Fidel Castro cannot be erased."

Elsewhere, Pope Francis, who met Fidel Castro when he visited Cuba last year, said the death was "sad news" and he was grieving and praying for his repose.

Castro, who was a professed atheist, was baptised as a Catholic and educated in schools run by the Jesuits.

British Foreign Secretary Boris Johnson said: "Fidel Castro's death marks the end of an era for Cuba and the start of a new one for Cuba's people."

In a telegram of condolence to Raul Castro, Russian President Vladimir Putin called the late leader an "inspiring example for many countries".

"Fidel Castro was a frank and tried and true friend of Russia," the Kremlin quoted the message as saying.

Mikhail Gorbachev, the final leader of the Soviet Union which had long acted as an economic and political prop for Cuba said Castro left a lasting mark on his country and on world history.

"Fidel held his ground and strengthened his country at the time of the harshest American blockade, at the time of massive pressure on him," Mr Gorbachev said.

"Nevertheless he led out his country from the blockade to the path of self-sustained and independent development."

Castro was "a great man of our time," said the president.

In Venezuela, a long-time ally of Cuba and staunch opponent of the political stance of the US, President Nicolas Maduro said Castro had inspired and would continue to inspire his country.

"We will keep on winning and keep fighting. Fidel Castro is an example of the fight for all the people of the world. We will go forward with his legacy," Mr Maduro said.

In Bolivia, where Ernesto "Che" Guevara died in 1967 in a failed bid to export Cuba's revolution, President Evo Morales said in a statement: "Fidel Castro left us a legacy of having fought for the integration of the world's peoples ... The departure of Comandante Fidel Castro really hurts." 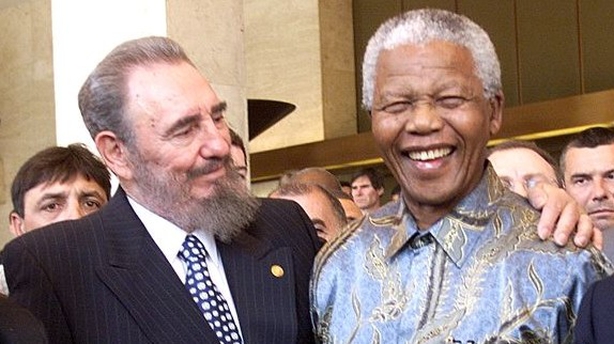 South African President Jacob Zuma had warm words, thanking the Cuban leader for his help and support in the struggle to overthrow apartheid.

In contrast, the reaction from some Cubans living in the United States was scathing and celebratory.

US Congress representative Ileana Ros-Lehtinen, a Cuban-American Republican from Miami, said in a statement: "A tyrant is dead and a new beginning can dawn on the last remaining communist bastion of the Western Hemisphere." 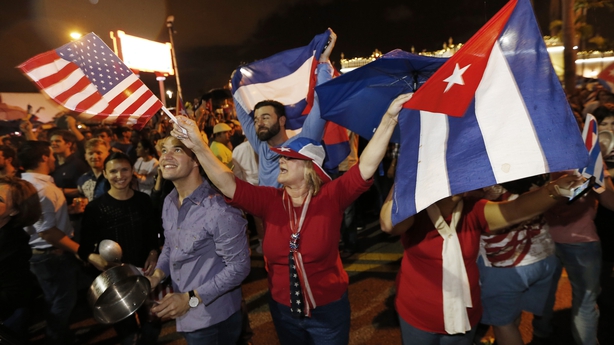 In Miami, in the area surrounding the Versailles Restaurant where many exiles who fled the Cuban revolution live, people took to the streets in their cars in the early hours of Saturday morning to celebrate Castro's death.

Hundreds of people gathered waving flags, banging pots and pans and carrying umbrellas to shield them from steady rainfall.

"This is the happiest day of my life, Cubans are finally free," said Orlidia Montells, an 84-year-old woman.