The Taoiseach and Tánaiste have attended Remembrance Sunday events in Northern Ireland, while a cross commemorating Irish soldiers in WWI has been dedicated at Glasnevin.

Mr Kenny has taken part in the ceremony every year since 2012 and laid a wreath of green laurels alongside the many red poppies at the war memorial in Enniskillen.

However, there were no discussions between the pair, with Mr Kenny confirming he will meet with Ms Foster in Dublin on Tuesday.

The pair are also due to meet in Armagh on Friday for a North/South ministerial meeting, where Brexit-related issues are expected to dominate the agenda.

Tánaiste Frances Fitzgerald travelled to Belfast, where she laid a laurel wreath at the Cenotaph at city hall.

Ms Fitzgerald was joined at the ceremony by Northern Secretary James Brokenshire.

Speaking afterwards, Ms Fitzgerald, whose grandfather served as a soldier in the British army and whose father was a colonel in the Irish Army, said it had been an important engagement.

She said: "So many people across the island lost their lives; 50,000 families affected by loss of a loved one during the First World War.

"We have had a government minister here since 2012 and I think it is really important to come together, to remember together and to look at our shared histories." 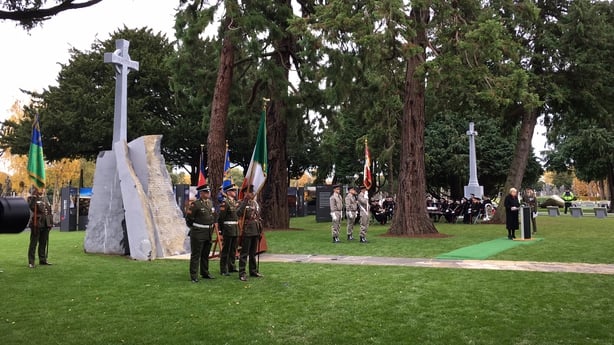 In England, British Prime Minister Theresa May was among those gathered at the Cenotaph in London for a commemoration ceremony.

Heather Humphreys was joined by the French Minister of State for Veterans and Remembrance at the Ministry of Defence for the ceremony.

The memorial is a gift to Ireland from France in recognition of Irish sacrifices made "in the defence and freedom of France, particularly in the WWI".