A new public service pay commission to examine the future pay of public servants has been dismissed as a talking shop by one of the associations representing gardaí who are planning industrial action next month.

The Cabinet earlier agreed to establish the commission, which will be chaired by former chairman of the Labour Court Kevin Duffy.

The Association of Garda Sergeants and Inspectors has described the proposed commission as a talking shop with no decision making powers.

Asked whether the announcement of the commission might avert industrial action planned for next month, AGSI President Antoinette Cunningham said: "Absolutely not".

She said the commission would be of little interest to members, who would view it as a talking shop that would kick the issue of public sector pay down the road for another six to 12 months.

The Taoiseach has described the threatened action as a "very serious situation" and appealed to the garda associations to engage in talks.

Speaking this afternoon, Minister for Public Expenditure and Reform Paschal Donohoe said that the unions inside the Lansdowne Road Agreement have made it very clear that if they see any changes for other bodies they will expect the same.

The minister said the commission will assist and provide input on the orderly unwinding of legislation which has underpinned the various public service pay and pensions reductions but would not take the place of direct negotiations between the bodies and the Government.

The members of the commission will be announced in the coming days. The chair will receive €11,000 and members €9,000.

Cabinet also agreed, as expected, that ministers and ministers of State will not have a pay rise.

It also understood the Cabinet has agreed that the salary of ministers will be reduced equivalent to the increase due for TDs under pay restoration.

A spokesperson for Independent Alliance ministers has said any decision on whether Shane Ross and Finian McGrath would back the Government in next week’s vote on the AAA-PBP motion on repealing the Eighth Amendment would "probably go to the wire".

It is understood the alliance will seek a free vote on the issue.

The two ministers voted against the Government on another private members bill on the issue in July and are pressing again for a free vote. 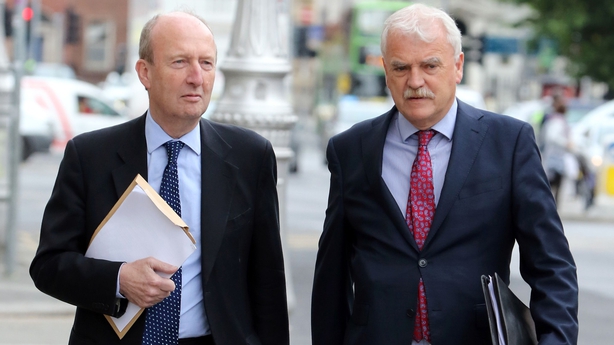 The spokesperson said those opinions had not changed since July but dealing with the issue would take some time.

The alliance discussed the issue at a meeting this evening.

A spokesman for the Taoiseach said, with the establishment of the Citizens' Assembly, a process was now in place which should be respected.

He said Enda Kenny had indicated that when that body had made its recommendations and the Government brought forward proposals, there would be a free vote.

Disagreement on appointment of new judges

The Independent Alliance spokesperson said the group would not be happy if judges were appointed ahead of the establishment of a Judicial Appointments Council, which was agreed with Mr Ross as part of the Programme for Government.

Earlier, Mr Kenny said if it was necessary to make judicial appointments, they would be made.

Mr Kenny also appeared to pour cold water on suggestions that the Court of Appeal might be enlarged.

The Bar Council of Ireland, which represents barristers, said any delay to judicial appointments would be a matter of grave concern.

Council Chair Paul McGarry said there was already significant pressure on the judicial system due to shortage of resources.

He backed a larger Court of Appeal, saying it manifestly required a significant number of extra judges to meet its obligations.