Prime Minister Benjamin Netanyahu has spoken by phone to US Secretary of State John Kerry in a bid to calm Washington's anger over new Israeli settlement plans, an official said today.

The plan to construct what activists say amounts to a new settlement in the heart of the occupied West Bank provoked an unusually harsh response last week from the White House, which accused Israel of betraying its trust.

US President Barack Obama's administration has accelerated its criticism of Israeli settlement building in the West Bank in recent months, warning it is destroying hopes for a two-state solution to the Israeli-Palestinian conflict.

Such criticism has added to Israeli concerns President Obama may seek to lay out parameters for a solution to the conflict or even support a UN Security Council resolution Israel opposes before leaving office in January.

The Israeli official, speaking on condition of anonymity, said Mr Netanyahu told Mr Kerry the new settlement plan was intended only as an alternative "if no other solution is found" to house residents of a nearby Jewish outpost that is under a court order to be demolished.

The official said the two men also discussed regional issues but could provide no further details on their phone call.

Israeli media reported that the conversation took place on Saturday.

The plan that provoked US anger involves 300 units in the heart of the West Bank, roughly halfway between the Palestinian cities of Ramallah and Nablus.

Israeli officials dispute that and say the homes will be located in an existing settlement, although Peace Now says the site is up to 2km away.

Israel has so far advanced plans for 98 of the 300 units - even though only around 40 families live in the outpost, known as Amona, that must be demolished.

The White House railed at the construction of 300 housing units on land "far closer to Jordan than Israel".

Settlements in the West Bank are viewed as illegal under international law and major stumbling blocks to peace efforts as they are built on land the Palestinian see as part of their future state.

Mr Netanyahu says he remains committed to a two-state solution to the conflict, though prominent members of his right-wing governing coalition say openly that they oppose a Palestinian state.

Settlements are a key political issue within Israel, with those in favour advocating that Jews must return to their biblical homeland, including in the West Bank.

Education Minister Naftali Bennett said last week that "we must give our lives" to the cause of annexing the West Bank, according to Israeli media, though he later backtracked on his comments. 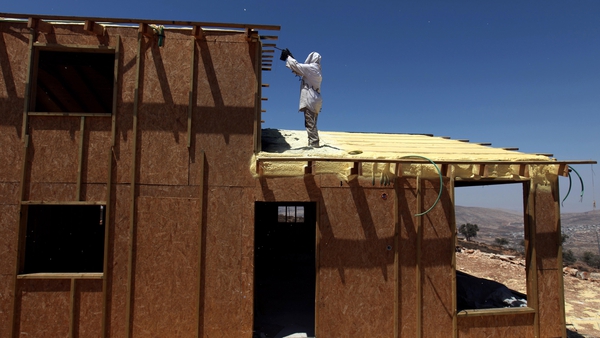