Thousands of Yemenis, many of them armed, gathered at the United Nations headquarters in Yemen's capital Sanaa today calling for an international investigation into an air strike on a wake this weekend that was widely blamed on Saudi-led forces.

The attack - that killed at least 140 people yesterday - hit a hall where hundreds of the city's notables had gathered for the wake of the interior minister's father.

The Saudi-led coalition has denied any role in the incident, believed to be one of the deadliest strikes in the 18-month-old war in which at least 10,000 people have been killed.

The attack has been condemned by the UN, the European Union, the United States and the International Federation of the Red Cross and Red Crescent Societies which said one of their staff was among those killed.

Pictures showed the inside of the once-ornate hall reduced to a pile of twisted metal and rubble after two huge explosions.

Radios and mosque loudspeakers throughout the city blared mourning verses as demonstrators crowded the streets around the UN headquarters, many waving their rifles in the air. 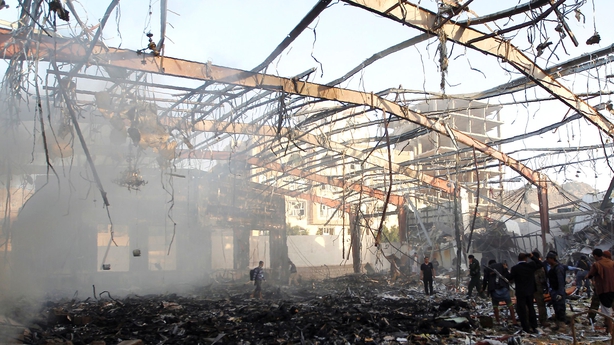 Saudi Arabia has launched thousands of air strikes against the Shi'ite Houthis, who the kingdom and its Gulf Arab allies fear are a proxy for their enemy Iran.

In another sign that the attack may escalate already raging regional tensions, Iran's main ally in the Arab world commiserated with the Houthis and condemned Saudi Arabia.

"I say to (Yemen's) people: you will ultimately triumph," the leader of armed Lebanese group Hezbollah, Hassan Nasrallah, said. 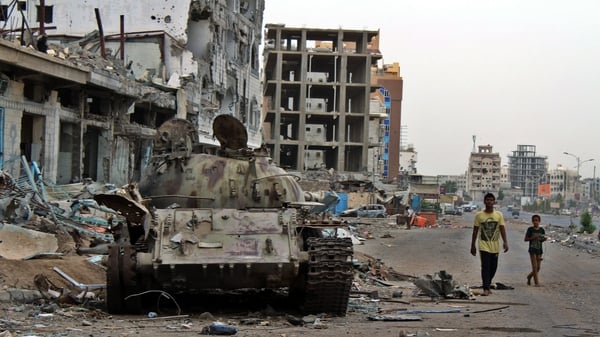 US cuts military advisers to Saudi-led coalition in Yemen