The Dutch children's ombudswoman has ruled that "Black Pete," the Christmas sidekick of Saint Nicholas, violates UN conventions and children's rights and could incite bullying and discrimination.

Wading into a bitter debate in The Netherlands over the popular blackface character, the ombudswoman Margrite Kalverboer ruled that "Zwarte Piet", as he is called in Dutch, should "be stripped of discriminatory or stereotypical characteristics".

These characteristics "must be changed so children of colour do not experience any adverse effects, and every child feels safe" during the Saint Nicholas celebrations, she wrote in a report.

Ms Kalverboer said her office had received complaints that Black Pete "is a travesty, and breeds discrimination and racism".

"Many children of colour say they experience discrimination in their daily lives and that it is worse around" Christmas time, the report says.

Altering Black Pete's characteristics would allow all children to "experience the joy of the tradition" known as Sinterklass and would be "consistent with the rights of all children in The Netherlands".

She based her ruling on the International Convention on the Rights of the Child, but did not say which of Black Pete's features should be changed. 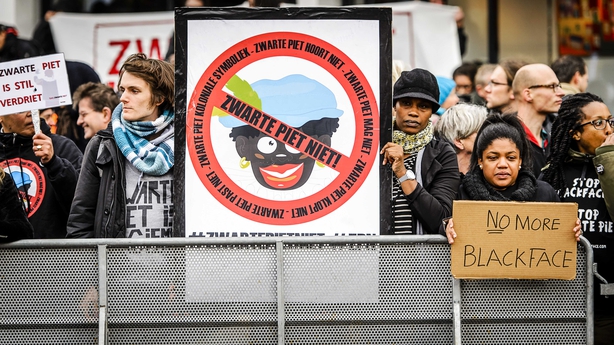 The debate reaches fever-pitch in the weeks before Christmas every year and has highlighted the issue of racism in the country, that in the past has taken in many immigrants and prided itself on tolerance.

But tourists are often shocked to find bands of black-faced people, dressed in gaudy clothes with hooped-earrings and bright turbans, wandering the streets of Dutch cities from early December playing music to entertain shoppers.

Dutch children though have grown up with the tradition for generations, and families and kids often dress up themselves as they await 6 December when their shoes are filled with chocolates by kindly Saint Nick.

And Saint Nicholas's arrival by boat in The Netherlands, accompanied by a band of Black Petes, is an annual popular family day out.

Many Dutch citizens see Black Pete as a harmless children's figure saying he is black from coming down the chimney, and denying there is anything racist in his appearance.

But last year the UN Committee on the Elimination of Racial Discrimination said the character was "sometimes portrayed in a way that reflects negative stereotypes" and is seen as "a vestige of slavery" by many people.

After a particularly heated debate in 2014 other Petes were introduced for the first time: "Cheese Petes" with yellow faces, "Stroopwafel Petes" with striped, light brown faces resembling the traditional Dutch syrup biscuit of the same name and a white-faced "Clown Pete".