The planned strikes at Dublin Bus have been suspended pending a ballot of staff following talks between management and unions at the Workplace Relations Commission.

The deal will see staff receive pay rises totalling 11.25% over three years, which equates to 3.75% a year - around the same as the Luas deal but significantly higher than average awards elsewhere in the private sector.

It represents a significant improvement on the 8.25% (2.75% per year) increase on offer under a Labour Court recommendation previously rejected by the workforce.

Dublin Bus said that the additional 1% pay proposal (2.75% to 3.75%) "will be financed by a range of offsetting efficiency measures as negotiated at the WRC".

"These offsetting measures will both increase revenue and reduce our cost base on an on-going basis," the company said in a statement. "This combined allows for the restructuring of the pay award."

The deal is not linked to additional productivity.

Under the deal, staff will be expected to cooperate with the introduction of drug and alcohol testing at work.

The proposal states that “the testing will be carried out post-accident, for cause and randomly. The random selection will be 5% of employees in any given year". 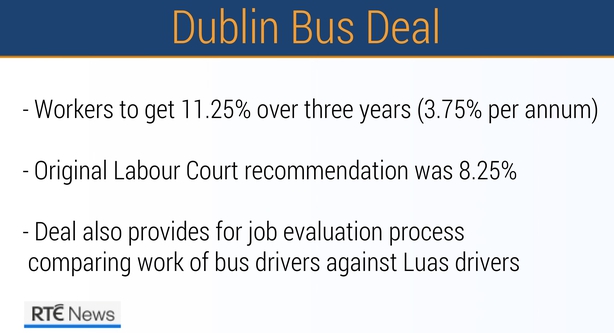 A code of practice is to be agreed by the end of this year.

Cooperation will also be expected on measures to reduce absenteeism.

There are also proposals relating to scheduling, pensions, and other policies.

The parties also pledge to engage on further productivity bargaining on a grade by grade basis, which could deliver further increases.

The ballot of the workforce is expected to take around ten days.

The deal was brokered following negotiations between management and unions over the past 31 hours.

The next day-long disruption of bus services in the capital was due to take place this coming Saturday, with unions planning 11 strike days in October.

The General Secretary of the National Bus and Railworkers Union has said his members will ultimately decider whether to accept or reject the deal.

Speaking on RTÉ's Six One News, Dermot O'Leary described the talks at the WRC as a "marathon session", adding that the proposals represent the best possible deal that could be achieved for his members.

Mr O'Leary said the union needs further detail on proposals surrounding "lean management" and on other policies and procedures.

He said there are no productivity measures contained in the proposal.

Minister for Transport Shane Ross has welcomed the move, saying he was "as relieved as every member of the travelling public to hear there has been a breakthrough in the talks between Trade Unions and management".

He added: "I would like to thank the WRC, the Trade Unions and management for their commitment to these talks."