Jeremy Corbyn has urged the British Labour Party to unite behind him after his overwhelming victory against leadership challenger Owen Smith.

Mr Corbyn strengthened his mandate with a 61.8% share of the vote - up from 59.5% last year - and won the support of more than 300,000 party members and supporters in a result which is likely to kill off any prospect of further attempts to unseat him for some time to come.

Accepting victory before cheering supporters in Liverpool, the veteran left-winger said he wanted to "wipe the slate clean" after a bruising contest, and called on Labour MPs to "work together and respect the democratic choice that's been made".

In a statement, Mr Smith said he respected the result and urged Labour moderates not to split the party in response. 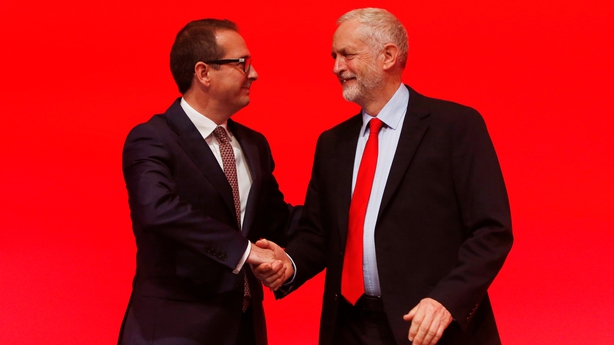 He has previously said he will not serve in a Corbyn shadow cabinet, which is thought likely to be reshuffled soon as the leader attempts to bring back on board some of the MPs who walked out of his top team in June.

Mr Corbyn said both he and his challenger were part of the "same Labour family" as he appealed for unity after receiving 313,209 of the votes cast, compared with 193,229 for Mr Smith.

A breakdown of the figures showed the Islington North MP defeated his challenger in all three sections of the 500,000-strong electorate - full members, supporters from affiliated organisations like the unions, and registered supporters who paid a #25 fee to vote.

He acknowledged he had a responsibility as leader to unite the party, but added: "It is also the responsibility of the whole party - Members of Parliament, councillors, party members and our wonderful supporters across the country - to work together and respect the democratic choice that's been made."

Quoting the maiden speech of former Labour MP Jo Cox, who was shot and stabbed to death earlier this year, Mr Corbyn said: "Always remember in our party, we have much more in common than that which divides us."

Mr Smith, who quit as shadow work and pensions secretary to fight for the leadership, said he would "reflect carefully" on what role he could play in Labour's future.

But he ruled out leaving for a rival centre-left party, saying: "I have no time for talk of a split in the Labour movement - it's Labour or nothing for me.

"And although today's result shows that our movement remains divided, it now falls primarily to Jeremy Corbyn, as Labour leader, to heal those divisions and to unite our movement.

"We have to turn round our dire opinion poll ratings and take on this right-wing, failing Tory government.

"Jeremy has won this contest. He now has to win the country, and he will have my support in trying to do so.

"Above all, despite present divisions, we have to stick together in for the long term.

"I call on those party members disappointed by the result and tempted to look elsewhere to stay with Labour, and to stay involved. Let's work together to renew this movement and take the fight to the Tories," added Mr Smith.

"The challenges facing the people on these islands have been brought into stark relief after the result of the Brexit referendum, and a strong British Labour Party is needed now more than ever," he said.

"I want to congratulate Jeremy Corbyn on his re-election as leader of the British Labour Party, and on behalf of all members of the Irish Labour Party I wish him well in building a convincing alternative to the current Conservative government," he added.