Livestock farmers angry at recent cuts in the amount they receive for their animals have staged a protest at an Aldi supermarket in Co Offaly.

They accused retailers and processors of short changing farmers and misleading consumers.

Around 200 farmers took part in the protest at the supermarket in Tullamore.

Irish Farmers Association president Joe Healy said the campaign was not just focused on Aldi, but on all retail groups including Lidl, Dunnes Stores, Tesco, SuperValu, as well as meat processors and the meat factories.

Mr Healy said that today’s protest was the start of the campaign and he called on consumers to support the farmers. 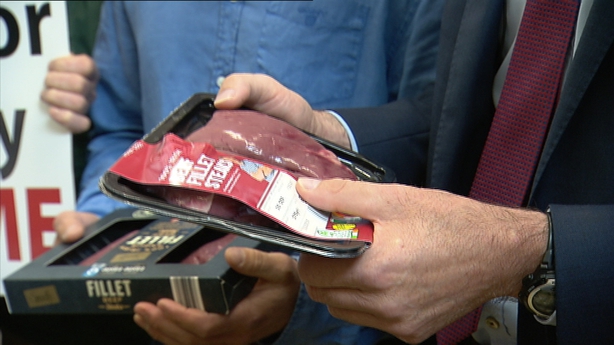 He said meat factories have used every possible excuse in recent months - including the drop in the value of sterling and uncertainty cause by the Brexit vote in the UK - to cut the amount they are paying farmers for their cattle by 35 cent per kilo and have forced farmers into a loss making situation.

Mr Healy pointed out that when all meat is taken together the average price Irish consumers pay for beef is almost €9 per kilo.

He said that with prices that high retailers and processors have plenty of margin to pay producers a sustainable beef price which would have to be at least €4 per kilo.

He said retailers "are guilty of using farmer profiles to market top quality beef to consumers pretending they are returning a fair price to the farmer.”

However, Mr Healy said the reality was that retailers are turning their backs on farmers by allowing processors to drive cattle prices down to loss making and unsustainable levels.

In a statement, Aldi Supermarket Chain said: "A cornerstone of Aldi's ability to offer best value groceries to its customers is developing long-term, sustainable and co-operative relationships with its Irish suppliers, producers and farmers.

"Aldi partners with more than 175 Irish producers, while many of them have been with us for over ten years.  All of the fresh meat, including fresh beef, sold in Aldi's 126 Irish stores is 100% Irish and Bord Bia approved.

"Aldi pays a fair and sustainable price for all of its products including its beef."